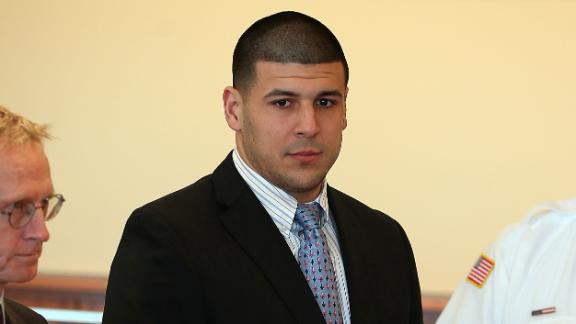 Aaron Hernandez apparently doesn't have enough of the $18 million he made in three years as a tight end for the New England Patriots to continue paying for the defense attorneys he retained for his legal proceedings.

Hernandez, jailed for nearly a year without bail in Massachusetts as he now faces murder charges related to the killing of three men, has filed a motion asking a Suffolk County court for two months "to make financial arrangements to retain counsel," according to legal filings, the contents of which were first reported Friday by Fox Sports and later confirmed by ESPN's Michele Steele.

The district attorney's PR department had no comment to ESPN's Steele, but said it is aware of the situation.

Boston lawyers Charles Rankin and James Sultan, along with attorney Michael Fee, have represented Hernandez since last summer when he became a suspect in the June 17 killing of Odin Lloyd.

They appeared earlier this week at his arraignment for charges in the killing of two other men, but Rankin and Sultan filed the motion with the court, writing that they may decline to continue as his counsel in the ongoing cases. They said their retainer with him has been "limited to arraignment only and related proceedings."

Fee, who recently changed law firms, was not included and has not filed a similar motion, according to the Fox Sports report, which said none of the lawyers responded to requests for comment.

Fox Sports reported that part of the reason for Hernandez's money troubles stemmed from his home in North Attleborough, Massachusetts, being under a restraining order. The order prevents the sale of the home for any other purpose than to pay off a future judgment in a civil lawsuit. That suit was filed by the family of one of the men he is charged with killing.

Public records show he paid $1.3 million for the house in November 2012, according to the Fox Sports report.

Two of the men Hernandez is charged with killing were shot in a drive-by about six weeks before Hernandez signed a five-year, $40 million contract with the Patriots.

Hernandez, 24, was released by the Patriots last summer after he was charged in the killing of the semi-pro football player Lloyd, who was dating a sister of Hernandez's fiancee. Lloyd's body was found in an industrial area near Hernandez's home.

Hernandez's lawyers have said he is looking forward to proving his innocence.

On Wednesday, Hernandez pleaded not guilty to seven charges -- including two counts of first-degree murder -- in the July 2012 shooting that killed Daniel de Abreu and Safiro Furtado. Prosecutors say one of the men bumped into Hernandez at a night club and spilled his drink.

Hernandez, who will continue to be held without bail, is due back in court June 24 for a scheduling hearing.

Information from ESPNBoston.com's Field Yates and The Associated Press was used in this report.