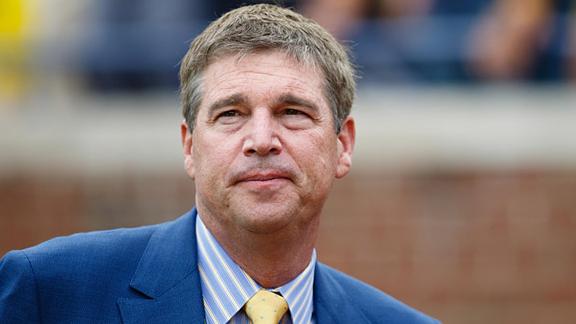 The Dave Brandon era in the Michigan athletic department officially ended Friday afternoon. The university's 11th athletic director handed in his resignation earlier this week amid a storm of controversy.

A string of athletic department mishaps in the past several months dominated headlines around the Michigan campus and served as a regular distraction at sporting events.

Schlissel said he would begin searching for Brandon's replacement immediately.

The president, who took office at Michigan in July, said he will be looking for someone who prioritizes highly the welfare of student-athletes and operates with "integrity to the Michigan way of doing athletics." He said previous ties to the school or its sports teams are not prerequisites for the job.

"I think we need the very best person possible to do this job," Schlissel said. "Certainly, people that have a connection to Michigan know many things about the university. I can tell you, though, despite the fact that I've only been here for about 110 days, I feel like a Michigan man already."

Schlissel appointed former Michigan football player Jim Hackett to serve as interim athletic director and help select a permanent replacement. Hackett played for legendary Wolverines coach Bo Schembechler in the 1970s and served as the CEO of a successful office furniture business after graduating. Hackett sits on the board of advisors for two academic programs at the university.

"Dave was a teammate of mine in the '70s, and I knew him during my business career here in Michigan," Hackett said. "I have a tremendous amount of respect for him and thank him again for an extraordinary commitment to this university."

Hackett will have all the powers of the athletic director until a replacement is named, including evaluating the football program and the future of its coaching staff at the end of the season if it takes that long to find someone new.

The new athletic director in Ann Arbor will take over a department whose flagship program is in a state of flux. Michigan's football team is 3-5 heading into its homecoming game with Indiana on Saturday. Coach Brady Hoke is 18-16 since winning the Sugar Bowl in his debut season as the Wolverines coach in 2011.

The struggles of the football team have added to Brandon's poor approval ratings this year, but other moves he has made during his five-year tenure left him with few deposits in the bank of public opinion among Michigan's supporters. His downfall picked up speed a month ago when miscommunication on the sideline allowed quarterback Shane Morris to return to the game against Minnesota after displaying concussion symptoms. The contradicting messages from Hoke and Brandon in the week that followed revealed what many believed to be signs of dysfunction in the athletic department.

Later that week, students and fans started petitions and held protests to ask Michigan to remove Brandon from office. The detractors added the Morris incident to a list of complaints that included alienating former players, commoditizing Michigan's rich football tradition, and raising student ticket prices to football games. Brandon attempted to reconcile with the student body in October by promising to dramatically decrease the price of tickets and to be more accessible to students in the future. Those moves weren't enough to sway opinion back in his favor.

Earlier this week, mgoblog.com posted caustic and condescending emails that fans wrote to Brandon about their concerns with the athletic department. The website reviewed email exchanges between Brandon and several different fans in which he allegedly told one to "quit drinking and go to bed" and another to "find a new team to support."

Brandon, the former CEO of Domino's Pizza, was hired as the athletic director in January 2010 and took office two months later. He spearheaded plans to spend hundreds of millions of dollars to upgrade the university's athletic facilities, and he increased the athletic department's revenue on a regular basis. He also increased spending and salaries, which led to a shrinking profit margin during his tenure.

Information from ESPN's Brett McMurphy is included in this report.