Adidas honors Kobe Bryant's past by reimagining the future 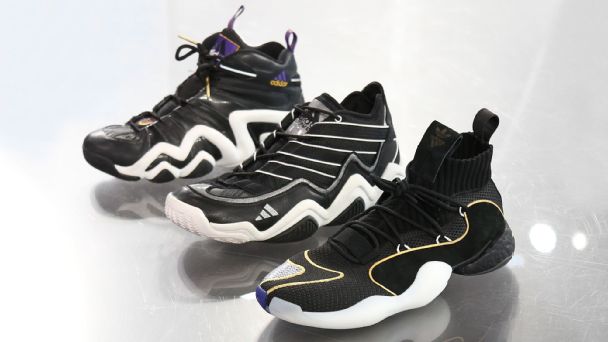 As Kobe Bryant had both of his Los Angeles Lakers jersey numbers retired earlier this week, he spoke to the Staples Center crowd about a bridging of the past and future.

For the Lakers and Golden State Warriors players on the floor Monday night, many of whom grew up idolizing the 18-time All-Star, the two eras of Bryant's career were defined not only by his separate jersey numbers, but by his footwear.

Andre Iguodala and Jordan Clarkson each honored the Kobe signature series with Nike, donning the current Kobe AD and the Zoom Huarache 2K4, the first model Bryant headlined after signing with Nike in 2003. Kyle Kuzma worked with "The Shoe Surgeon" to create a custom purple python pair, while Lonzo Ball set aside his Big Baller Brand sneakers for the first time this season and broke out a rare edition of the Kobe X.

Though Nike dominated the tributes to Bryant, Adidas also took advantage of the grand stage. Many of Bryant's most memorable moments while wearing No. 8, including his first three championships, came during his initial endorsement deal with Adidas.

Pulling cues from some of Bryant's earliest sneakers, like the Top Ten 2010 from his rookie season and his KB8 and KB8 II signature models, Adidas reimagined a basketball silhouette from two decades ago. Updated with today's technology and crafted with modern knit materials, the revamped look was also designed with an eye toward the off-court fashion that modern NBA players have embraced.

The result is the Adidas Crazy BYW X, a stylized update to several of the brand's most beloved models from its early years of signature basketball sneakers. Fittingly, both Nick Young and Brandon Ingram debuted the model Monday night, hand-carrying them into the arena and sharing an early preview of their pairs on their Instagram stories. Young and Ingram are expected to again wear the purple-and-gold-accented stealth black sneaker when the two teams face off again tonight.

"The future of Adidas is on a different level with these," said Young, who was a teammate of Bryant's for his final three seasons and now plays for the defending champions.

To redevelop their next generation of hoops sneakers, the Adidas basketball team looked back to an era of innovation that included not only Bryant's most memorable models, but also a performance technology long loved by players.

With years of bio-mechanics insights that fueled a podular design on the bottom of the shoe, the premise of the mid-1990s series of models was direct and easy to grasp: "Feet You Wear." The outsole literally looked like a foot with a sculpted arch, flat heel and rounded edges.

As competitor brands were adding air and a variety of visible technologies, the FYW concept instead brought players lower to the ground, looking to mimic the control of playing barefoot by offering up more stability.

Off the court, the line of shoes took on an unmistakably quirky look that helped make them a modern classic. The KB8, rebranded as the "Crazy 8" after Bryant left the brand, has seen regular retro releases and been embraced by players such as Young, who grew up in Los Angeles idolizing the Laker great, and the next generation of Lakers such as Ingram, who was born just after Bryant's rookie season.

As for the updated (and lengthy) acronym for the new edition, the "B" celebrates the upgraded cushioning in the shoe. Since launching its Boost foam technology just a few years ago, Adidas as a brand has experienced a wave of momentum that has carried with it a new audience of loyalists and fans. For the first time, the Styrofoam-esque foam has been shaped into pods, much like the original Feet You Wear series, reworked now as "Boost You Wear."

Additionally, the shoe is the first Adidas basketball sneaker to include both of the brand's logos on the tongue -- the escalating three bars performance logo and the leaf-looking vintage Originals "Trefoil" logo -- marking a collaboration between new and old for the company.