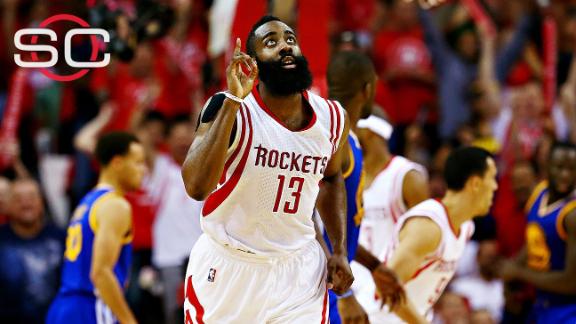 Adidas has made a big play for the biggest basketball sneaker free agent of the summer of 2015.

The company has submitted a bid of $200 million over 13 yearsto sign Houston Rockets guard James Harden, sources told ESPN.com. Nike, whose deal with Harden recently expired, has until the end of next week to match the deal or lose him.

A $200 million offer is huge, considering it represents half of what the brand paid for 11 seasons as the NBA's official uniform supplier. Earlier this year, Adidas announced that it would not fight to renew that deal, which will see its competitor Nike take over after the 2016-17 season.

With incentives, if the deal is consummated, Harden could very well make more from Adidas in the coming years than the Rockets.Harden signed an $80 million contract extension with Houston in 2012 that goes through the 2017-18 season.

"We've invited James Harden to join Adidas," said Adidas spokesman Michael Ehrlich in a statement. "We're a brand of creators and he truly embodies what that means with his approach to the game, his look and his style on and off the court. He's coming off a historic season where he won the scoring title and was voted MVP by his peers. His connection with fans is unparalleled and unprecedented and he can take the game, our brand and the industry to new heights."

Despite having the NBA deal, Adidas has slipped in recent years due to a lack of individual basketball stars. In 2012, the company signed a massive 14-year deal with Derrick Rose, only to see him miss plenty of action because of knee injuries. Its other star is Damian Lillard, whose Portland Trail Blazers aren't really showing much promise. Endorser John Wall shows plenty of flash, but his first signature Adidas line fell relatively flat this year.

With Stephen Curry locked up by Under Armour and Kevin Durant choosing to stick with Nike last season, Harden is the only veteran whom Adidas could poach -- even if it means overpaying. This past year, Adidas fell to the No. 3 best-selling apparel brand in the United States, after being passed by Under Armour.

Harden doesn't have a flashy game, per se, but he certainly is in the upper echelon of marketable stars. His beard speaks for itself, as does his natural sense of fashion. That is big for Adidas, who sells plenty of Originals and could always use a boost to its more expensive Y-3 line.

There's also reality star-type placement, as there's apparently a budding relationship between the Rockets star and Khloe Kardashian. There's an even greater connection with Adidas as rap star Kanye West, who is married to Khloe's sister Kim, moved his Yeezy line from Nike to Adidas last year.

There's also international hope for Harden, as the Rockets already are very popular in China thanks to former player Yao Ming. Sources say part of what Adidas is willing to pay has to do with the potential for the masses to embrace Harden on an even greater scale if the Rockets can make more of a splash in the playoffs in the coming years.

Harden hasn't yet had a signature shoe, but the Nike Hyperchase, which was the shoe that he was most attributed to this past season, sold well certainly because of his wearing of them. In most circumstances, Nike wouldn't match this number from Adidas, but it's said things are hypersensitive inside corporate headquarters after the brand not only gave up Curry to Under Armour -- after not matching an offer for less than $4 million a year -- but also missed at golfer Jordan Spieth, who went with Under Armour as well.

Adidas is under new leadership, which is eager to put its stamp on a turnaround. Eric Liedtke recently took over to lead global branding for Adidas, as longtime executive Erich Stamminger left in the midst of the company being pressured to bolster its business in North America.

The company hasn't been afraid to pay huge dollars to get big properties in sports. Its deal with Manchester United -- the largest uniform sponsorship in sports, guaranteeing the team $128 million a year for 10 years -- officially kicked off on Saturday. But money doesn't always help win deals. Sources said Adidas offered the most money to the University of Michigan to try to keep its deal with the school, but the Wolverines still chose to move on with Nike after this season. In Harden's deal, however, Adidas has to win if Nike can't match the deal offered.

As the basketball shoe business has skyrocketed in recent years, Adidas has mostly been a player on the sideline. Nike and its Jordan-owned brand make up 90 percent of basketball shoes sold in the U.S., while Adidas has less than 5 percent market share.

From April through June, Harden had the seventh-best selling jersey in the NBA, finishing ahead of the likes of Blake Griffin, Chris Paul,Kevin Durantand Russell Westbrook.