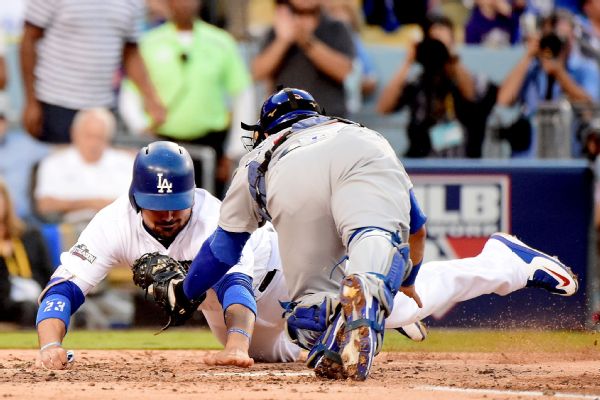 A fired-upAdrian Gonzalez was adamant he was safe after a controversial call that he andDodgersteammates thought swung Wednesday night's National League Championship Series Game 4 in the direction of the Chicago Cubs, and he sounded off after Los Angeles'10-2 loss.

"I knew I was safe," Gonzalez said. "We've got plenty of still frames that prove I was safe. Unfortunately, it turned into a trial, and they said there was not enough evidence."

Gonzalez was called out at home to end the second inning while trying to score from second base on Andrew Toles' single. A sliding Gonzalez stretched his left hand toward the tip of the plate as Cubs catcher Willson Contreras applied the tag with his left hand near Gonzalez's upper left arm.

Gonzalez tweeted a photo that appeared to show his left hand on home plate with Contreras' mitt still an inch or two from connecting.

The Dodgers challenged plate umpire Angel Hernandez's decision, and the out ruling was upheld after replays that were interpreted both ways.

"Usually, they say the play stands, but they said there wasn't enough evidence, which means they know I was safe," Gonzalez said.

Gonzalez said his run, which would have put the Dodgers up 1-0 and kept the inning going with two runners on, would have given rookie pitcher Julio Urias a cushion in a high-pressure situation.

"It completely changes his way of pitching," Gonzalez said. "Now he gets one guy on base and he's trying not to let that one run score, where if we've got that lead, he feels more comfortable. He attacks it a bit more. It changes everything. One little thing can change the outcome."

Gonzalez called out on close play at plate
Adrian Gonzalez talks about being called out at home plate on a close play in which he feels he was safe.