Adrian Peterson to plead not guilty 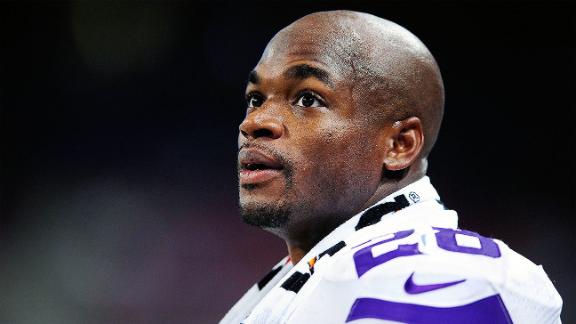 MINNEAPOLIS -- A day before Minnesota Vikings running back Adrian Peterson makes his first court appearance in Texas, it appears he will not consider pleading guilty to child abuse charges in an attempt to expedite his return to the playing field.

Mary Flood, the spokesperson for Peterson's attorney, Rusty Hardin, told ESPN.com in an email that Peterson is committed to pleading not guilty to charges of reckless or negligent injury to a child, stemming from an incident where he used a switch, or small tree branch, to discipline his son during a visit to his home in Texas earlier this year.

"If the court asks for a plea tomorrow [and we do expect that to happen], it will very definitely be NOT guilty," Flood wrote in an email to ESPN.com on Tuesday. "We hope that a trial date is also discussed but don't yet know how the court's docket is looking."

Unless Hardin is able to secure a quick trial date and convince a jury that Peterson did not violate Texas' corporal punishment law while disciplining his son, it likely means the running back's 2014 season is over.

Montgomery County first assistant DA Phil Grant had previously said it typically takes nine to 12 months before a trial begins in such cases. Flood did not want to predict how soon a trial could take place, adding it depends on the availability on Judge Kelly Case's docket.

"I hope we learn more tomorrow," Flood said, "but it's possible that we won't get a date tomorrow and we'll just get the beginnings of discussions about a date."

Peterson has been on the NFL's exempt/commissioner's permission list since Sept. 17, and he is receiving his full $11.75 million salary. Yet he is barred from all team activities until his case is resolved.

Vikings coach Mike Zimmer did not sound optimistic when asked Tuesday if he expected Peterson to return to the team this season.

"I don't know that that's not going to happen in 2014," Zimmer said during his press conference. "Honestly, I want the best for Adrian, number one. Okay? But I also have to coach the guys that are here and go forward.

"If things get resolved and it's a good thing, then the more power to him. We will worry about that when the time comes."

Peterson maintained his innocence in a statement issued through Hardin on Sept. 15, saying, "I never ever intended to harm my son. I will say the same thing once I have my day in court."

If he is convicted, he could face six months to two years in state prison, though he could be placed on probation as a first-time offender. He also could be subjected to NFL discipline under the league's enhanced domestic violence policy, which can suspend players for up to six weeks.