Adrian Peterson wants to stay in Minnesota but would consider Giants, Bucs, Texans 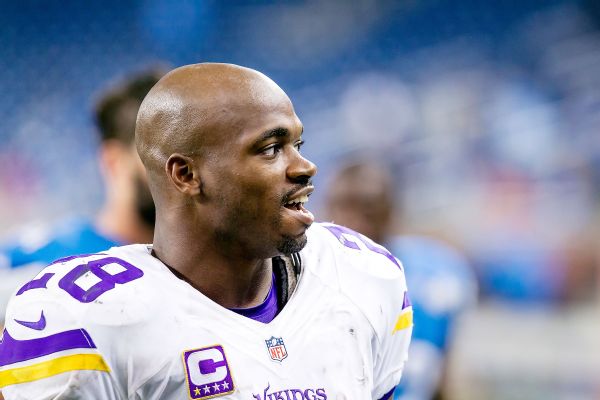 ESPN
Vikings running back Adrian Peterson says he sees himself remaining with Minnesota next season but mentioned the New York Giants, Houston Texans and Tampa Bay Buccaneers as teams he might consider in free agency.

"I see myself in purple. A lot has to take place," Peterson said on First Take on Thursday. "I see myself finishing off in purple. It is a business at the end of the day, so with that, things could end up differently. ... Hopefully we can work things out."

The 31-year-old, a seven-time Pro Bowler and the league's MVP in 2012, has spent 10 years with the Vikings. Peterson said if he were to enter free agency that he would want to go to a team with an opportunity to compete for the Super Bowl. He said he would want to play for a team with a good defense, a good offensive scheme and a great coaching staff.

"There's a couple teams out there that I've thought about. ... New York was one of them that popped up, Tampa Bay, lot of different teams. Houston would be a good spot," Peterson said. "I'll stop right there. ... I'm just throwing random names out there."

A restructured deal would need to be completed sometime before the new league year begins March 9.

Peterson had surgery on a torn meniscus in his right knee on Sept. 22. He came back in three months, beating doctors' timetable for his return by a month, to appear in one game but did not play in the Vikings' final two games of the season.

Despite the injuries, Peterson said he believes he has five more years as a premier running back.

"I have a mindset to be my best," he said. "Going into the next season, I'll be ready to roll."

Peterson said he was optimistic about the Vikings' future but acknowledged that the offensive line was a concern. He said improving the team up front would be part of his conversations with the Vikings.

"We have some really good things going on in Minnesota," Peterson said. "The defense ... we have a lot of game-changers on defense. The offense ... [Sam] Bradford did a great job given what he had to work with. ... I feel like we tighten up the offensive line, add another weapon out wide, you've got a nice running game to complement that and the sky's the limit."

Information from ESPN's Ben Goessling contributed to this story.

AP says he has '5 strong years' left in NFL
Adrian Peterson tells the First Take crew about his plans to retire in the next 5-7 years and also reveals where he has thought about playing if the Vikings move in a different direction.
Related topics:
sportsespnminnesota vikingshouston texansfree agencyadrian petersonnfltampa bay buccaneersfirst takenew york giants
Copyright © 2020 ESPN Internet Ventures. All rights reserved.
More Videos
From CNN Newsource affiliates
TOP STORIES