Agent: Vikings not right for Peterson 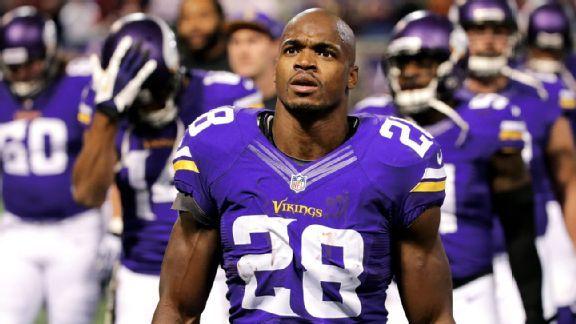 PHOENIX -- The agent for Minnesota Vikingsrunning back Adrian Peterson said Monday that he doesn't think "it's in Adrian's best interest to play in Minnesota" this season and beyond.

It was the first time that agent Ben Dogra has spoken publicly on a standoff that has run nearly three months between the Vikings and their franchise player.

Vikings officials reiterated that Peterson is under contract and expected to remain with the team, but Dogra's comments -- which come days after he refused a meeting with general manager Rick Spielman -- suggests Peterson is digging in.

Dogra, standing in the lobby of the Arizona Biltmore hotel -- site of the NFL owners meetings -- would not elaborate on Peterson's situation.

But when asked if he thought Peterson would return to Minnesota he said in full: "I don't think it's in Adrian's best interest to play in Minnesota. Why would it be?"

Moments later, meeting with two reporters, Vikings co-owner and president Mark Wilf said: "The bottom line is Adrian is an important part of the Minnesota Vikings. He's represented us on and off the field. We're getting ready for the 2015 season and we fully expect him to join his teammates and be a part of what we feel is going to be a great season ahead."

Agent: Vikings Not Right For Peterson
Sal Paolantonio and Kevin Seifert discuss Adrian Peterson's agent's comments about the Vikings no longer being the right fit for Peterson.