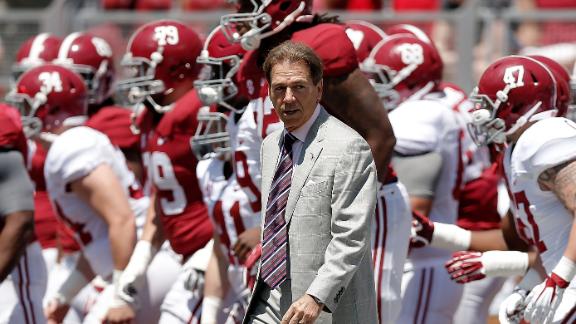 Alabama and USC will launch their 2016 seasons on Sept. 3 at AT&T Stadium in Arlington, Texas.

The Cowboys Classic will mark the eighth meeting between the programs. Alabama got the best of USC the last time the teams met, winning 24-3 in the 1985 Aloha Bowl.

The game against the Trojans is the latest of the Crimson Tide's high-profile neutral-site openers. Alabama will play West Virginia in Atlanta this season and Wisconsin in Arlington in 2015.

By adding the nonconference tilt with USC, Alabama fulfills its new obligation from the SEC to begin scheduling at least one nonconference game against a Big Five conference opponent starting in 2016.

Last summer, Alabama canceled a previously scheduled home-and-home series with Michigan State for 2016 and '17. Tide athletic director Bill Battle said at the time that the move was done because of "the uncertainty of conference football schedules in those years."

But according to coach Nick Saban, he tried and failed to persuade the Spartans to move the game to a neutral site.

The 2016 game between Alabama and USC could feature an interesting storyline. Lane Kiffin, who was fired by USC last fall, joined the Crimson Tide as offensive coordinator in January.

Alabama won the last time it played at AT&T Stadium, beating Michigan 41-14 to kick off the 2012 season.

Florida State and Oklahoma State will play in the 2014 Cowboys Classic.