All 5 Hawks starters honored by NBA 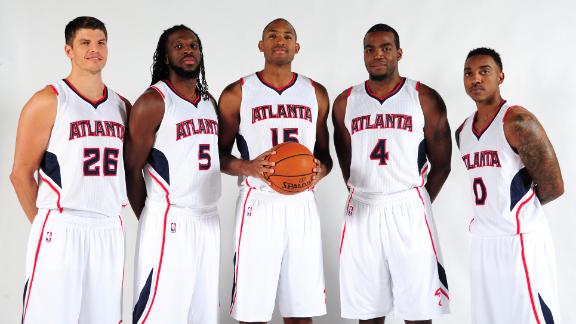 ATLANTA -- The Hawks were rewarded for the first 17-0 month in NBA history with another first on Wednesday -- all five starters were selected Eastern Conference players of the month for January.

All-Stars Paul Millsap, Jeff Teague and Al Horford were honored by the league, along with the other starters, Kyle Korver and DeMarre Carroll. They all averaged in double figures for the month, but none were at 20 points per game, showing the balance that has marked the team's surprising rise.

The Hawks won a franchise-record 19 games in a row until a loss at New Orleans on Monday night. They rebounded Wednesday night with a 105-96 victory over the Wizards and have a comfortable lead in the East. Atlanta isjust percentage points behind Golden State for the best overall record.

The win over the Wizards stretched the Hawks' current winning streak vs. Eastern Conference games to 13 games, according to the Elias Sports Bureau.

Houston's James Harden was chosen Western Conference player of the month. He averaged 25.8 points a game in January, along with 6.7 assists and 2.2 steals while shooting 42.6 percent from 3-point range.

The Hawks said it's the first time in NBA history that all five starters from one team were named players of the month. Atlanta outscored its opponents by an average of 11.9 points a game in January.

"We appreciate the recognition of our starters' play during this past month. It is reflective of all the work our entire team and organization has put in," said coach Mike Budenholzer, who will lead the East in the All-Star Game. "We place a strong emphasis on having the right approach every day and making daily improvement. Collectively, we know that we have a lot more work to do this season and look forward to continue growing as a team."

Hawks' Starting Five Awarded NBA Player Of The Month
Michael Smith, Kate Fagan and Bruce Bowen discuss the Hawks being rewarded for the first 17-0 month in NBA history by having all five starters selected as Eastern Conference players of the month for January.