Another meeting in LA for Russ, Harden, Kawhi and PG 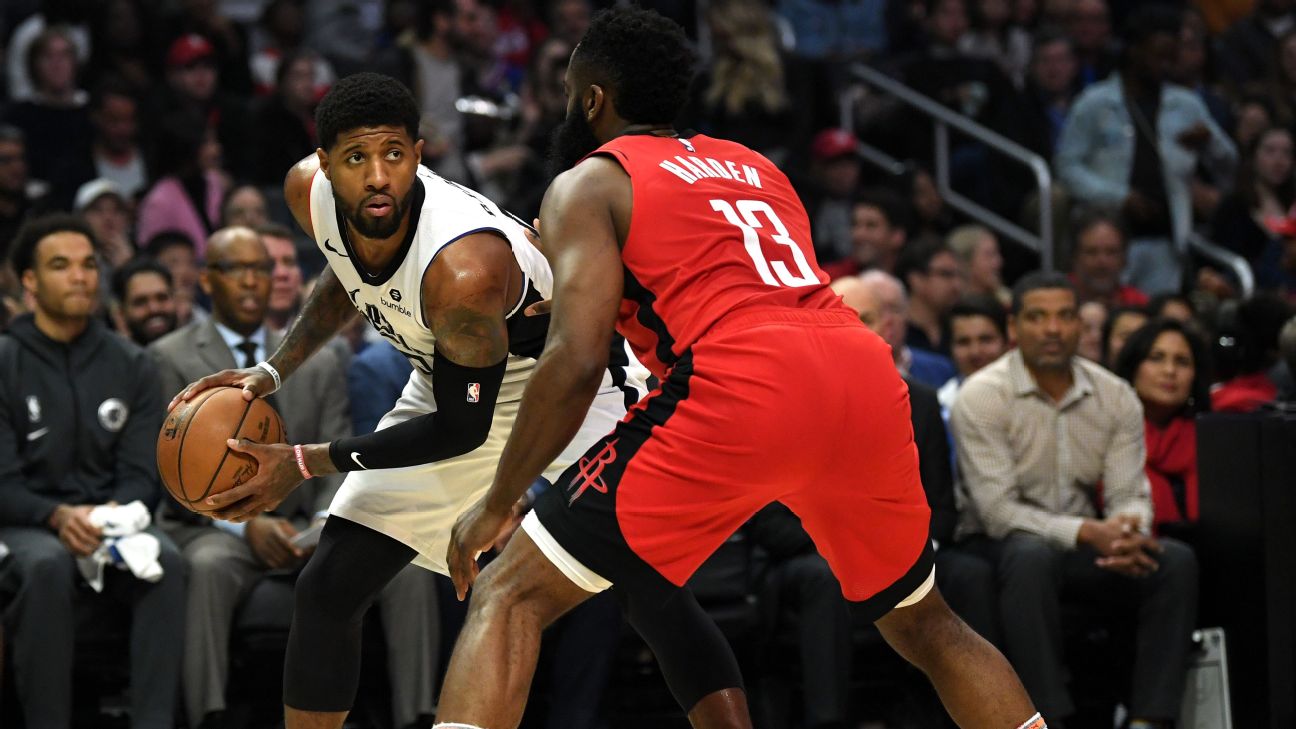 Russell Westbrook just knew something was up with the rim at Staples Center.

The basket seemed too low. The backboard seemed a little off. So he stopped the game and asked them to measure. A stadium worker climbed up a ladder, took out a level, snapped a picture and pronounced everything was in order.

"It was lopsided," Westbrook said. "At least I thought. But it don't matter."

But whatever didn't show up on that level, certainly showed up in Westbrook's performance. Because Westbrook caught fire in the second half, scoring 25 of his game-high 40 points to lead the Houston Rockets to a comeback 122-117 win over the LA Clippers Thursday night at Staples Center.

In the latest contentious game between the Clippers and Rockets -this time Lou Williams and Patrick Beverley were ejected for arguing calls with the officials - Westbrook continued to look more and more comfortable orbiting alongside the offensive comet that is James Harden.

Westbrook led Houston's second straight double-digit comeback by blitzing through and past LA's normally stout defense. Houston outscored LA 36-18 in the third quarter alone, keyed by a 14-2 run in which all seven field goals were scored in the paint.

The Rockets rallied from a 25-point deficit Monday night at home against the San Antonio Spurs. They trailed by as many as 17 against the Clippers.

LA was in total control in the first half and led the Rockets 77-61 with 9:03 left in third quarter. But in the last 21 minutes of game, Westbrook and Harden outscored the entire LA team 43-40.

The Clippers rallied to take the lead back in the fourth quarter after trailing by as many as a dozen points; Paul George blocked a Westbrook layup with 5:10 to play and Kawhi Leonard hit a jumper over PJ Tucker to put the Clippers up 111-105. LA blew a double-digit first half lead against the Rockets only to come back from a double-digit second-half deficit to win at home in November.

But Houston would not be denied this time, finishing the game on a 15-4 run to close out a game that featured 14 lead changes and seven ties.

It was the latest chapter in the festering rivalry between the two teams, which feature four of the Los Angeles area's native sons. Paul George, Kawhi Leonard, Russell Westbrook and James Harden each grew up in Los Angeles at a time when Kobe Bryant was snarling over the NBA. Each boy studying his moves and his swagger, determined to play like him one day - no matter how far away that seemed from their hometowns Palmdale (George), Moreno Valley (Leonard), Lawndale (Westbrook) and Artesia (Harden).

Westbrook was the most unheralded of the four, famously not even making the varsity team at Leuzinger High in Lawndale until his junior year. But he's clearly starting to find his stride in Houston after an up and down start.

The last time Houston came through Los Angeles was something of a referendum on Westbrook's failings as a shooter and responsible playmaker, as the Clippers trapped Harden relentlessly and forced the ball out of his hands.

But the Rockets don't need Westbrook to be a deadly shooter. They just need him playing downhill, slashing to the basket for the type of angry layups he's made a career off of. Thursday night, Westbrook scored 18 points in the paint and hit 12 of his 13 free throw attempts, which is also something of a turnaround for him. Westbrook has made 90.2% of his free throws in December after making only 72.2% in November.

Harden, who played for the same Pump & Run AAU team in 2006 that George played for in 2007, finished with 28 points on 8-of-16 shooting. Most of that came in the second half after Patrick Beverley thoroughly frustrated him in the first half.

Harden had his second lowest scoring output of the season in the first half, making just 1-2 shots and turning the ball over 3 times with Beverley as his primary defender. Once Westbrook got going in the second half however, Harden had room to operate.

Leonard had 25 points, 9 rebounds, and a steal, but had four turnovers and only two made field goals in the second half with PJ Tucker stepping up his defense on him. 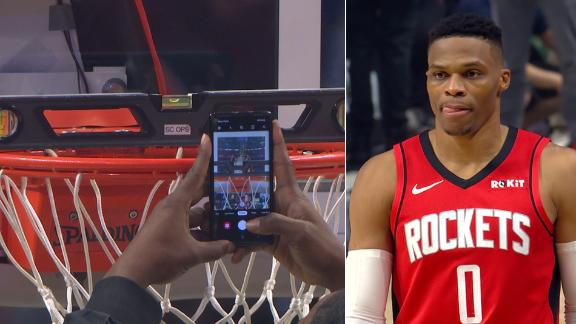 Westbrook questions if rim is level before 2nd half
A Staples Center staff member brings out a ladder and level tool to prove to Russell Westbrook the rim is regulation. 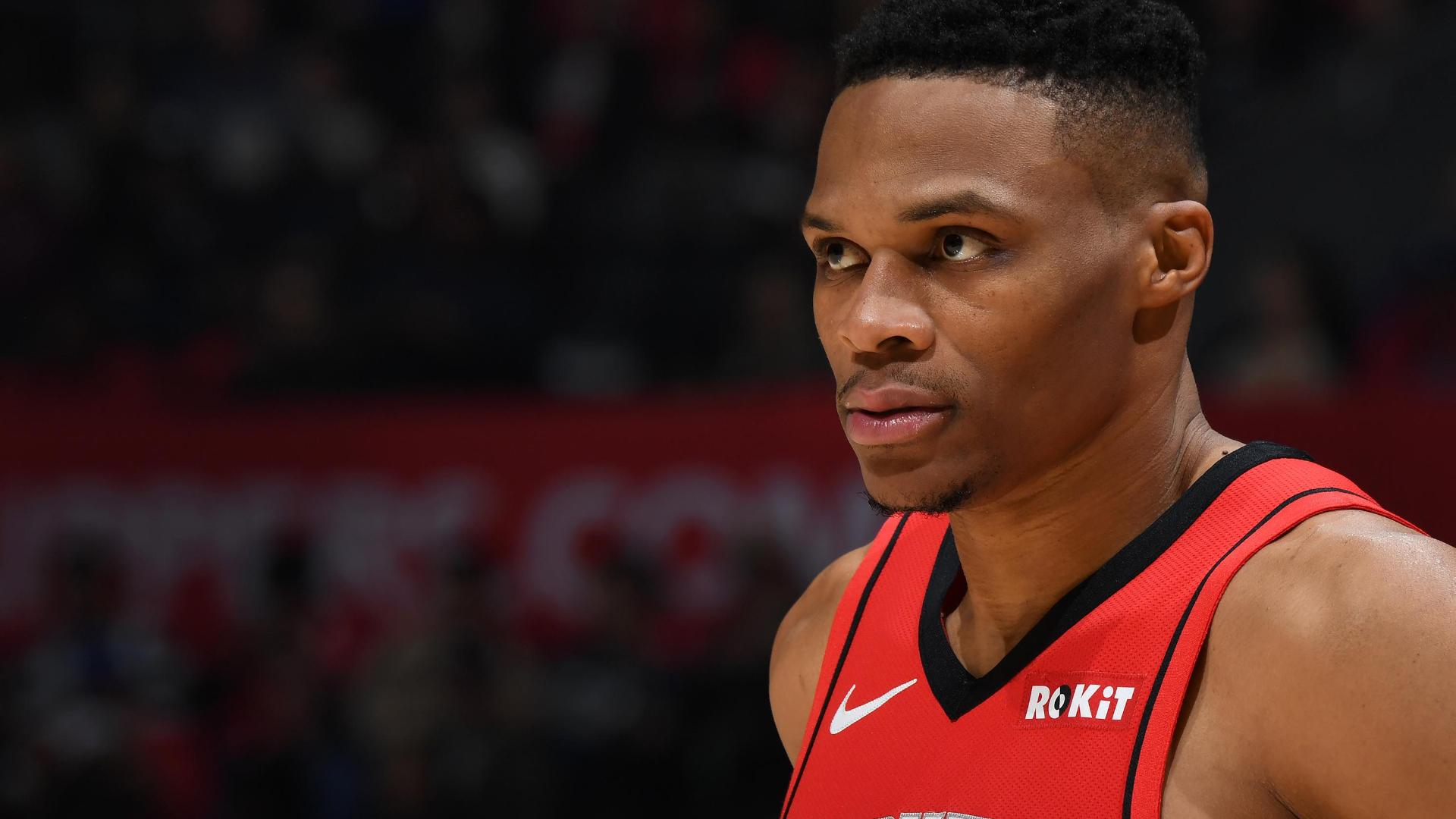 Westbrook goes off for 40 vs. Clippers
Russell Westbrook scores a season-high 40 points in the Rockets' win vs. the Clippers. 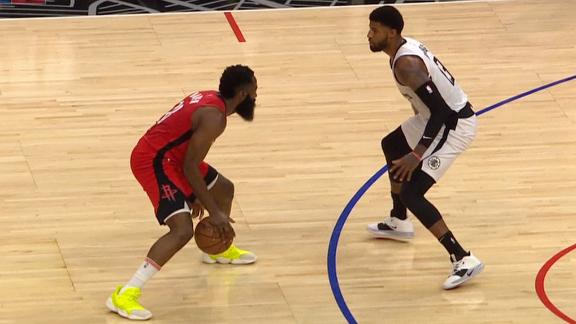 Harden dances on George for smooth floater
James Harden puts the moves on Paul George as he gets into the lane for a floater. 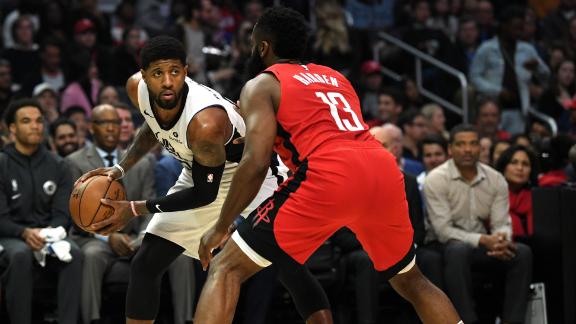 George pours in 34 points vs. Rockets
Paul George hits six 3-pointers on his way to a 34-point night vs. the Rockets. 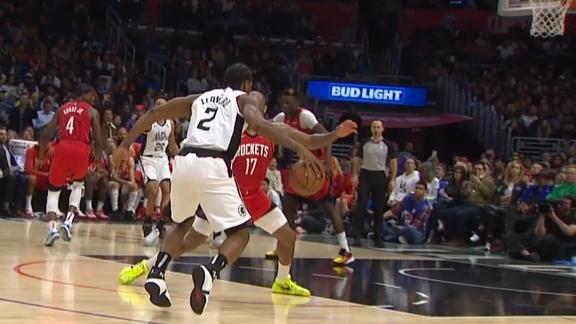