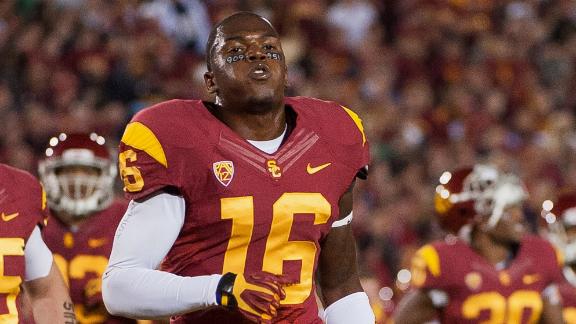 Brown posted on Instagram on Thursday morning, "Sark treated me like a slave in his Office...Can't play for a racist MAN!!!!! #Fighton" and posted a similar message on Facebook.

The posts were later deleted.

Sarkisian, who revealed that Brown had quit the team on Aug. 21, said he was blindsided by the comments and said Brown never expressed any of those feelings to him when the coach met with him earlier this week.

"As far as what [Brown] said on Twitter, I think it's ridiculous," Sarkisian said. "Any of you guys that know me and if you ask anybody in our building, any of our players -- feel free to -- that's about the furthest thing from the truth. Quite honestly, I'm shocked."

Brown did not mention specifics about why he felt this way or what might have occurred between him and Sarkisian.

He has been sidelined most of training camp with a hyperextended elbow and was listed as the sixth running back on the depth chart after switching over from cornerback earlier this month.

"Anthony decided not to play football anymore," Sarkisian said. "We obviously tried to encourage him not to quit. We thought he could be an asset to our team, especially when healthy. We really tried to make it a point to accommodate the position change he wanted. He wanted to move to running back, and we did so.

"He unfortunately got injured in training camp and was working his way back and decided he didn't want to play anymore. It's a bit unfortunate because we could have used him. We think he could have helped us."

Brown had six starts and 43 tackles during his USC career. He saw action in only two games at cornerback last season after suffering ankle injuries against Hawaii and Notre Dame.

Brown's departure and accusation comes on the heels of Josh Shaw being suspended indefinitely after lying about how he suffered two high ankle sprains last weekend.

"I've got over 100 guys in that locker room that are more important or just as important than these two isolated incidents," Sarkisian said. "I owe it to those guys to do the best job that I can do to prepare our staff and to prepare them to play a great football game on Saturday, and that's what my focus is on."

I know Sark as well as anyone. He is the farthest thing from a racist. This is a ridiculous claim!

- Matt Leinart (@MattLeinartQB) August 28, 2014"Coach Sark is who we all believe him to be," USC receiver George Farmer posted on his Twitter account. "Accusations like those couldn't be more untrue."