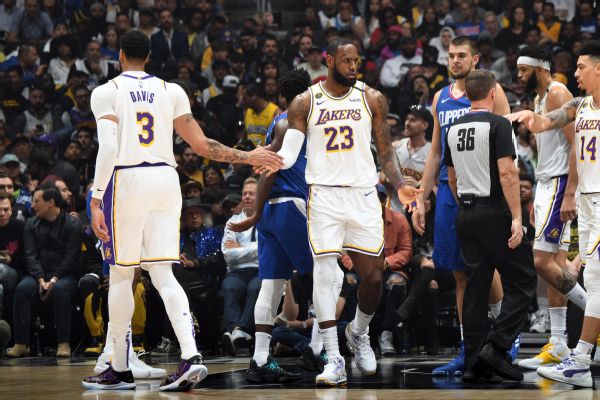 LOS ANGELES -- When the NBA season came to a screeching halt on March 11 because of the coronavirus pandemic, a bucket of cold water doused both the Los Angeles Lakers' hot streak (they were 8-2 since the All-Star break) andAnthony Davis' birthday candles (he turned 27 that day).

At the time, Davis considered his team, with the No. 1 record in the West, a championship contender. He envisioned his first season in L.A. alongside LeBron James possibly peaking with him holding up the Larry O'Brien Trophy in June.


And how does he look at those championship chances now that he has begun formal individual workouts at the Lakers' practice facility before flying to Orlando, Florida, next week for the NBA restart?

"Actually, I think our chances are higher just because we're all rested and we're all ready to go," Davis said Thursday on a videoconference call with reporters. "If anything, our chances got higher and it's going to be about just who wants it more."

The time off has benefited Davis, he said. After missing eight games in the regular season because of shoulder, elbow and tailbone injuries, his body has had ample time to heal.

"It's been good for me to kind of let some of them lingering injuries I had towards the time when the NBA stopped to kind of recover and heal and get back into the best version of myself," he said. "I feel 100 percent healthy. Well, I don't feel, I am [100 percent healthy]. I feel like I'm ready. Ready to go."

Not that any of the wear and tear seemed to slow Davis down prior to the break. He was averaging 26.7 points on 51.1% shooting, 9.4 rebounds, 3.1 assists, 2.4 blocks and 1.5 steals while shooting a career best 84.5% from the free throw line. He anchored the Lakers' defense -- ranked third in the league in terms of efficiency, allowing a stingy 105.5 points per 100 possessions -- and his teammates and coaching staff touted him as a leading candidate for Defensive Player of the Year.

Lakers coach Frank Vogel said that part of Davis' game that impressed him the most this season was his "mindset to play through minor nagging injuries." It stands to reason if you take that same mindset and apply it with a healthier body, his impact could be even more noticeable.


"[When] you're on the floor, you have an opportunity to grow and your team has an opportunity to grow," Vogel said on a videoconference call Thursday. "When we get to Orlando, it'll be the next step in that process and his journey in this season as a Laker. We look forward to seeing -- hopefully the best is yet to come."

Davis, James and Alex Caruso all took the court Wednesday at the start of the team's "pre-training camp" before Orlando. Davis and Rajon Rondo were back in the gym Thursday, sources told ESPN.

Rondo will be one of the Lakers' backup guards relied upon to make up for the absence of Avery Bradley, who opted out of Orlando for family reasons and to continue focusing his efforts on combating systemic racism in this country.

Davis said he considers Bradley a "key piece" the team will be missing but added he never considered backing out of the season finale -- even though he shared Bradley's concerns -- because he believes the NBA can address them as a united front from Florida.

"I think we're stronger together," Davis said. "Everyone in Orlando, we're going to obviously be talking about everything that's going on from a social injustice standpoint. And I think a platform of the NBA, where I think at that time, we're going to be the only ones on TV.

"So, I think we're able to have more people in the room from other teams and receive other ideas and figure out how we can change the world. What can we do individually and what can we do as a unit to make change, and I think the more people we have, the more minds we have, the more ideas and thoughts we can come up with to kind of change the world and change what's going on." 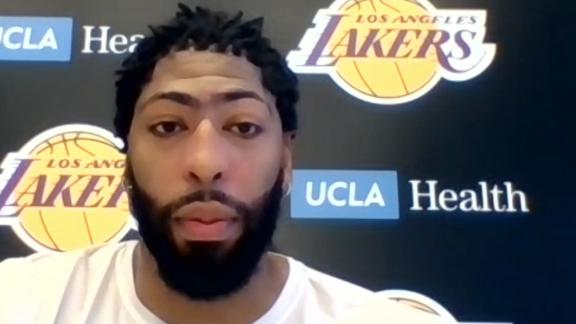