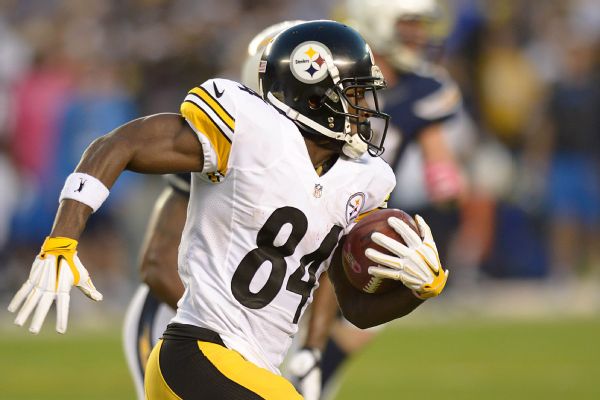 The league told the Pittsburgh Steelers wide receiver to remove his Muhammad Ali-inspired cleats in favor of a standard Nike shoe on Sunday, according to Dean Blandino, the NFL's senior vice president of officiating.

Brown wore the Ali cleats for the game's first two series but played the rest of the first half in white-and-black cleats.

"I thought it was OK, but ... I made the adjustment," Brown said following the Steelers' 31-13 win over theNew York Jets.

This is the fourth time the NFL has had an issue with Brown's footwear. In Week 1, he was fined for wearing baby blue cleats in a win over the Washington Redskins. In a Week 3 loss to the Philadelphia Eagles, Brown wore baby blue cleats with the faces of his children displayed on them. An NFL uniform inspector told him to remove them.

In the following weeks, Brown wore black-and-gold cleats, but with special designs -- one honoring legendary golfer Arnold Palmer last week, and Ali this week. Last week, Brown was told to remove his Palmer cleats in a win over the Kansas City Chiefs.

If a player refuses to alter his uniform at the request of the inspector, he will be sidelined for the rest of the game.

This season, Brown has faced nearly $50,000 in fines for excessive touchdown celebrations and uniform violations.

Asked why there was no accompanying celebration after his fourth-quarter touchdown put Pittsburgh up 24-13 on Sunday, Brown replied:"I can do what I want. It's America. It's how I was feeling today. It's a long game. It's a tough game. It wasn't the time to really put the pumps in."