Assessing the bust potential of Shohei Ohtani in fantasy 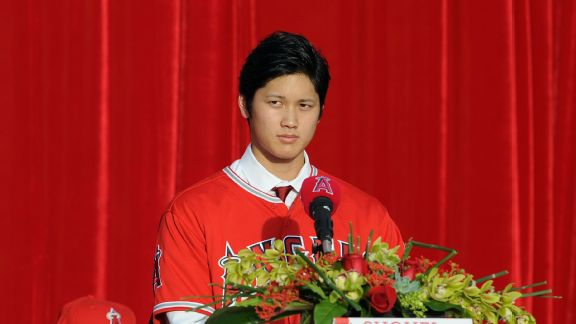 Now that Shohei Ohtani's utility in ESPN leagues is known, here's my strategy regarding drafting him in fantasy baseball leagues: I probably won't be.

Ohtani is plenty skilled and likely to make a significant impact but, as spring training dawns, the buzz appears to be far greater than his possible 2018 statistical contribution. Although we'll wait to see where his ESPN ADP settles as live drafts get underway, offsite indications are that he's typically going in what would be our Rounds 7-8 -- or between picks No. 64-75 overall -- which is at least 15 spots too early for my tastes.

I outlined my specific projections for Ohtani at the time he signed with the Los Angeles Angels in December, but now that we know he can be used as both a hitter and pitcher (but not simultaneously), here are my concerns regarding an Ohtani draft strategy:

His UCL: Has everyone forgotten that Ohtani was diagnosed with a first-degree sprain of his ulnar collateral ligament during a November physical? While this is considered to be the least severe such sprain, it still gives the Angels every reason to be patient with his development. In addition, he had right ankle surgery in October to repair a posterior impingement and remove a bone spur, so it cannot be said that he has had a "normal" offseason.

His innings pitched/pitching workload: Putting aside the differences between the Japanese and U.S. games -- six-man rotations, the size of the baseball, etc. -- Ohtani, still only 23 years old, didn't amass the kind of lofty innings totals that would convince a U.S. team to give him "staff ace" treatment. He never topped 160 2/3 innings in any of his five seasons in Japan (averaging 108 2/3), and threw just 25 1/3 innings in 2017, the latter primarily due to the aforementioned ankle problem. Even though he's probably the most naturally talented pitcher on the Angels' roster -- yes, you can make an argument for Garrett Richards -- that doesn't mean Ohtani is guaranteed 160-plus frames in 2018. He might throw 150 this year, 180 in 2019, and then go on from there.

His adjustment to the U.S. game: Again, those differences between the games on either side of the Pacific do matter, and Ohtani is no guarantee to make an instant, successful transition. His attempt to be a two-way player, too, could tax him physically just as it boosts his intrigue in fantasy baseball leagues. Keep this in mind: Of the top 10 Japanese-born starting pitchers in WAR (Wins Above Replacement) in their U.S. debut seasons, the only two to provide top-25 starting pitcher value were Hideo Nomo in 1995 and Kenta Maeda in 2016.

His skills with the bat: I'm not sure why Ohtani is assumed to be an instant success as a hitter, and I'm expecting minimal, if any, fantasy contribution from him with the bat. Remember, he had a 28.5 percent career strikeout rate in his career in Japan, and 27.3 percent in 2017 alone. Of the 48 major leaguers with a K-rate of 27 percent or greater and at least 250 plate appearances last season, 28 batted below .250. Not one batted higher than .288 (Nick Williams) and the group hit .242 collectively. Ohtani's hitting contributions are probably going to come down to the desperate grab for occasional home runs, at much expense to your batting average. He might have 2018 hitting numbers much like those ofMadison Bumgarner, only with more at-bats.

His non-roster status: It's rarely ever mentioned, but for the same reasons that Ohtani was subject to the international amateur free agent market rules -- he couldn't have become a true free agent for two more seasons -- he's also not required to occupy a 40-man roster spot at the onset of spring training. This is a minor hurdle, especially in comparison to the above points, but it's also a reminder that the Angels are under no pressure to place him on said roster to begin the 2018 regular season in the event they don't deem him ready.

Just to be clear, my current Ohtani ranking is still No. 91 overall and my No. 23 starting pitcher, both of which seem plenty generous and certainly address his immense talent. My guess is that if I have any shares of him this season, though, it'll only be in dynasty formats.
Report a correction or typo
Related topics:
sportsespnfantasy mlbrankingsfantasyfantasy baseballfantasy rankingsdraftnews fantasylos angeles angelsshohei ohtani
Copyright © 2022 ESPN Internet Ventures. All rights reserved.
TOP STORIES
UPS driver, 24, collapses, dies in SoCal heat
New California laws on bars, ghost guns, schools taking effect
14 suspects grab and run out with merchandise from Century City mall
4th of July fireworks in Southern California: Where to watch
Newsom adds restrictions on ghost guns, marketing firearms to minors
Man graduates LAPD academy at 45 after becoming US citizen
California first to cover health care for all immigrants
Show More
Free gas giveaway leads to massive traffic jam in Compton
Broken hydrant sends water geyser over Los Feliz intersection
California gas tax increase kicks in. What you need to know
Technoblade, Minecraft YouTuber watched by millions, dies at 23
California late start law aims to make school less of a yawn
More TOP STORIES News