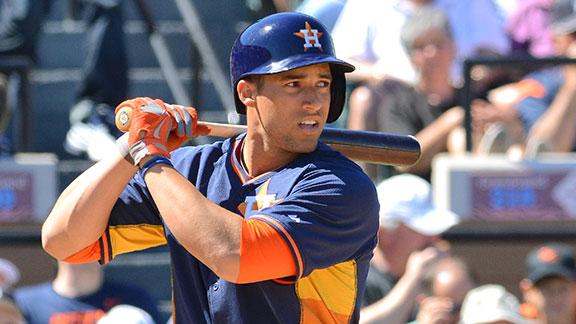 Earlier in the day, the Astros had posted on their official Twitter account that they had promoted Springer from Triple-A Oklahoma City.

We've got a Springer in our step! Welcome @gspringer_4 to the Houston Astros! pic.twitter.com/mCjgjxVh9C

- Houston Astros (@astros) April 16, 2014The 24-year-old outfielder had 37 homers and 108 RBIs with 45 stolen bases combined in Double-A and Triple-A last year. He was off to a strong start in Triple-A this season, too, hitting .353 with three homers and nine RBIs.

Springer told The Associated Press he received the news after Oklahoma City's win over Colorado Springs on Tuesday night, when he hit a grand slam.

Springer was selected 11th overall by the Astros out of UConn in the 2011 amateur draft.

"I have to understand who I am as a player and I understand what I can do, and just go out there and treat this like it's any other game ... and try to help the Houston Astros win," he said.

There was a buzz around the ballpark on Wednesday with Springer's arrival. The hashtag SpringerDay' was trending on Twitter in Houston and fans were excitedly tweeting all day about his debut.

General manager Jeff Luhnow was a little giddy about Springer's call-up, too.

"We don't want to rest all our hopes on one player, but he's a pretty good player and there's more behind him," Luhnow said.

"If he does well, I think it will lift our team (which) is now struggling a little bit and lift our city's spirits and give us hope that there's more like him coming. That's exciting. That's what we've been working for."

Springer was selected 11th overall by the Astros out of UConn in the 2011 amateur draft. Manager Bo Porter said he will be Houston's everyday right fielder.

"When you look at ... the production in which he's been putting up and if you look at the woes we've had offensively and trying to get our offense going and having a guy of his caliber that we can plug into our offense, he can definitely help," Porter said.

Springer knows people are looking for big things from him, but is careful not to get caught up in the hype.

His parents flew in from Connecticut to be at Wednesday's game and his father raved about his namesake.

"You're going to see some pretty special things out on the field ... his whole approach to the game," the elder George Springer said. "And he has a smile that's as infectious as it is contagious, and I'm looking forward to seeing it myself because I'm a baseball fan, too."

In a corresponding roster move, the Astros optioned outfielder Robbie Grossman to Triple-A. Houston also designated pitcher Lucas Harrell, who has allowed 14 runs in three starts this season, for assignment.