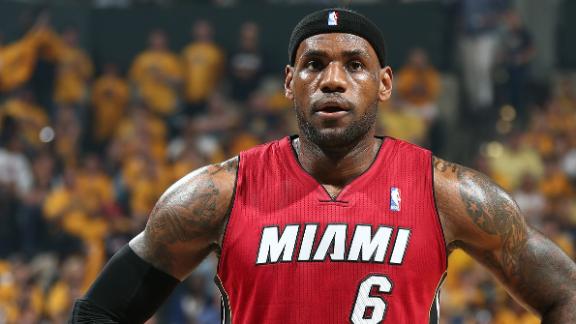 The agent for LeBron James has met this week with officials from multiple teams interested in courting the four-time league MVP in free agency, according to sources close to the process.

The exact number of teams to secure face-to-face meetings with Cleveland-based agent Rich Paul was not immediately known, but sources told ESPN.com that the Phoenix Suns, Houston Rockets, Dallas Mavericks and James' home state Cavaliers have had the opportunity to make presentations to Paul in recent days.

Sources told Broussard that Suns owner Robert Sarver met with Paul on Wednesday and pitched the idea of luring James from the Miami Heat to the desert by trying to sign Carmelo Anthony or Chris Bosh as well.

A picture that appeared to be Mavericks owner Mark Cuban in Cleveland circulated via Twitter on Thursday, but Cuban denied to ESPN.com that he was there to meet with Paul.

"I was there for a 'Shark Tank' commitment," Cuban said, referencing his TV show.

James has made it clear via his Twitter feed that he is spending the early days of his free agency on vacation with his family and is scheduled to attend the World Cup final in Brazil on July 13. Paul is meeting with the respective team officials on his own, sources said.

The Heat, meanwhile, have yet to secure a free agent to fortify a supporting cast around James. The Heat are somewhat hampered by the fact that their own marquee free agents -- James, Bosh and Dwyane Wade -- are not locked in to deals, but sources told ESPN.com that Miami has aggressively pursued cost-effective shooters such as Anthony Morrow and Alan Anderson to come to South Beach, along with Los Angeles Lakers center Pau Gasol.

The Heat are among the high-profile teams -- along with Oklahoma City, San Antonio and New York -- trying to convince Gasol to sign for a low-dollar deal. Gasol will meet with the Heat in Los Angeles, with Heat president Pat Riley and coach Eric Spoelstra present to make the pitch, a source told ESPN.com's Ramona Shelburne.

Sarver, meanwhile, has spoken openly of his plan to pursue James.

"We are in a good position," Sarver previously told The Arizona Republic. "We have a lot to offer, too, with the depth of our roster compared to some of the other teams. We think we have a favorable opportunity, but obviously he'll make his decision when he wants to make it. He's a smart player and a smart businessman. He'll look at the facts and make a decision."

James and Paul decided before free agency that they would handle the process differently than they did in 2010, and that James would be removed from the front line as Paul handled all initial discussions. Other than making it clear that James would accept only a contract for the maximum value of an estimated $20.7 million and that the deal would include flexibility on length, Paul and James have been virtually silent in recent days as they watch how the free-agent market unfolds.