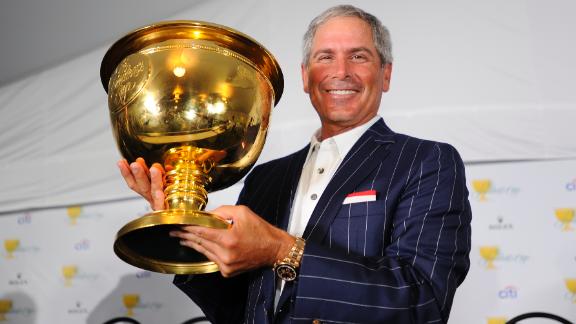 GLENEAGLES, Scotland -- Although he would not comment directly on the controversial American post-Ryder Cup news conference, Paul Azinger on Monday said he would consider a return as U.S. captain but added that the PGA of America needs to make changes to its system and philosophy.

"I'm not going to rule anything out,"Azinger, who was captain when the U.S. last won the Ryder Cup in 2008,told USA Today. "But my goal is the bigger picture. It is time for the PGA of America to recognize the great disconnect and formulate the same business model for selecting a captain as it does for selecting its president and officers.

"Europe consistently repeats a philosophy of leadership that every captain has learned from the captains in the past. It is an approach that is comfortable and familiar. The U.S. approach is less comfortable and completely unfamiliar to every repeat player. The players have to adjust to a completely unique system to the previous two years."

The Europeans finished a 16-11 victory on Sunday at Gleneagles, winning the Ryder Cup for the eighth time in the past 10 meetings. The Americans have just two victories since Tom Watson captained the team to a win in 1993, including the 2008 victory.

Watson's second attempt this past weekend didn't go nearly as well and was the cause of plenty of second-guessing in the aftermath, most notably from Phil Mickelson. Lefty, playing in his 10th Ryder Cup, openly questioned -- in a news conference with Watson sitting a few chairs down -- why players were not consulted and called for a return to Azinger's "pod" system that proved popular at Valhalla. But he never used Watson's name.

"Nobody here was in [on] any decision," Mickelson said with his 11 teammates sitting beside him.

"Unfortunately, we have strayed from a winning formula in 2008 for the last three Ryder Cups, and we need to consider maybe getting back to that formula that helped us play our best."

Azinger, 54, won 11 times on the PGA Tour, including the 1993 PGA Championship. He also played on four Ryder Cup teams.

He declined to comment about the events that occurred at the Sunday news conference.

"America's issues in this Ryder Cup go far deeper than who Watson should have played," Azinger said. "What Europe has in place for its selection process is a business model. They are more bonded. We have lone wolf captains. The captain matters.

"There is a razor-thin line between winning and losing these matches. Europe has the intangible right now. They give themselves the 1 percent extra chance to win through its business model and cohesiveness."

Watson's vice captains were Andy North, Raymond Floyd and Steve Stricker, the latter of whom would be the only possibility for a future captaincy.

"The PGA of America has officers that move up the ranks, getting sage advice while moving up the ranks. And then many of them stick around and keep offering advice. Europe has had very few lone wolves. The captains were vice captains, sometimes more than once. They learned coming up the ranks.

"I think the PGA of America should recognize their business model is exactly the same as what Europe does in selecting a captain."

The PGA of America runs the U.S. side of the Ryder Cup and is expected to announce the 2016 captain by the end of the year.

"Tom is a competitor," McGinley said of the eight-time major champion. "There's no tougher competitor in the game of golf than Tom Watson. We all know that. He's incredibly disappointed. I saw him this morning and he is very disappointed, of course, but you know what? He's got that smile, that steely grin.

"He's a hard man, I've said that from day one. And he's a man I respect. In the last two years, I have respected him even more. I feel very privileged to have been on this journey with Tom, who has been a great hero of mine throughout my life. That was a win-win situation."