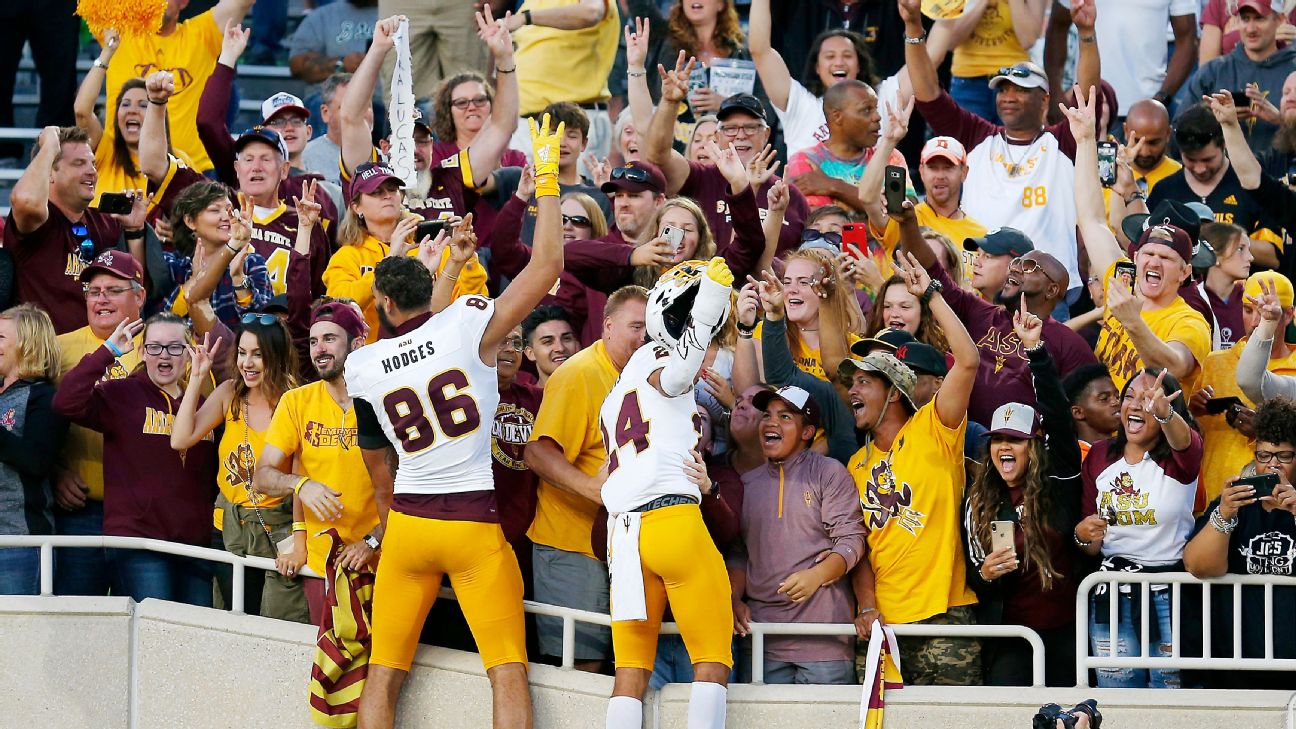 It's hard to win football games. Coaches talk about this all the time, usually to explain why fans should take some 40-point underdog seriously, but it's still probably true. At least, it was Saturday.
On a weekend in which there were zero matchups of ranked teams, we were treated to a delightful menagerie of weather delays, frisky FCS teams, brutal special-teams plays and a handful of memorably ridiculous decisions that proved, indeed, winning doesn't come easy.

Start in Happy Valley, where Pitt had a chance to tie the score on its hated rival with a touchdown after picking up a first down at the Penn State 1. Three straight plays gained nothing. The decision on fourth down with less than 5 minutes to play? A field goal attempt. That 19-yard chip shot missed, not that it would have mattered much.

For the record, since the start of last season, when teams go for it on fourth-and-goal from the 1, they score touchdowns 70% of the time.

Well, that's irrefutable logic. It's the rough equivalent of saying "Weekend at Bernie's II" wasn't going to win an Oscar without being nominated first, but it's nevertheless true.

Michigan State did Pitt one better a few hours later. The Spartans also looked at the NCAA rule book for the number of players allowed on the field and did that one better too.

After Arizona State took a 10-7 lead with less than a minute to play, Michigan State drove down the field and into field-goal territory, aided by a questionable pass interference penalty. The Spartans lined up for a 42-yarder, andMatt Coghlindrilled it. Flag. Sparty had 12 men on the field. Backed up 5 yards, Coghlin kicked again ... and missed.

But that wasn't Saturday's low point. No, we had to wait for that one. Wait and wait and wait.

Iowa and Iowa State sat through more than three hours of delays due to weather, so perhaps that's why Cyclones sophomore Datrone Young was so enthusiastic to get downfield on Iowa's late punt that would've given Iowa State a last chance to win. Young collided withDeshaunte Jones, who was fielding the punt, and the ball rolled free, recovered by Iowa. And so it ended 18-17, Iowa.

And that didn't even include Kentucky surrendering a 76-yard run as Florida was just trying to run out the clock or Florida StateandVirginiacombining for seven personal fouls or pass interference flags in the fourth quarter or USC's interception in overtime. It's hard to capture it all, really.

Was it a good day of football? Well, it depends on your definition of "good." Was "Road House" good? Is Weird Al good? Are hot dog eating contests good? It really doesn't matter. It was fun and it was entertaining. Head-scratching too. But that's the subtle brilliance of a Saturday like this one.

Hurts had 99 rushing yards on Oklahoma's opening drive because he isn't going to even let you think there's a chance he is not staying atop the Heisman rankings.

Even by Tagovailoa's standards, 444 yards and five touchdowns on the road in an SEC game is pretty darned impressive.

Burrow threw a pick against Northwestern State, which constitutes big news. Aside from that, another ho-hum game with more than 400 total yards and three touchdowns.

Through three games, Fields has accounted for more touchdowns this season (12) than Dwayne Haskins had last season (11).

Through three games, Ehlinger has 12 touchdowns and no turnovers.

We're just three weeks into the season, but the heat is getting turned up a bit for some big-name teams. So, how bad is it? Let's take a look.

Yeah, Lawrence is off to a rough start. TheClemsonQB threw two picks against Syracuse, giving him five on the season -- one more than he had all of last season. But are we really going to worry about Lawrence? He is too good for this to last long, and the rest of the schedule is too bad for him not to put up monster numbers in the next few months.

Panic rating: The "This is Fine" meme

What else can Helton say? He knows the writing is on the wall, and with a new athletic director and a brutal schedule upcoming,USC's loss to BYUon Saturday was probably just another flame emerging.

Panic rating: Kevin Bacon yelling "All is well!" at the end of "Animal House"

Yes, Florida came back to win at Kentucky, but the Gators lost quarterbackFeleipe Franks in the process. Kyle Trask held his own, completing 9-of-13 passes for 126 yards, but it remains to be seen how the offense will respond long term. Franks is the first Florida QB since Tim Tebow to throw more than 12 TDs in a season, so it's not a foregone conclusion that another successful passer is waiting in the wings.

Michiganhopes this is the year it beats Ohio State

Panic rating: Sweating through your khakis

The Wolverines were off this week after going to overtime against Army in Week 2, but the heat got turned up a bit with another dominant win by Ohio State. The Buckeyes trouncedIndianabehind a stellar day from Justin Fields and 193 yards from J.K. Dobbins.

Yes, it's bad. It's intruders-in-the-house, lose-to-Eastern-Michigan bad. But hey, at least they've been prepared for the worst.

For years, the #goacc hashtag -- all lower case -- was shorthand for the league's woeful performances, but asFlorida Stateand then Clemsonwon national titles, the social media sarcasm dwindled. Well ... it's baaaaack.

Week 3 was a brutal one for the league, starting with an admittedly blown call at the end of North Carolina-Wake Forest and a horrendous loss by Boston College at home to Kansas on Friday night.

On Saturday, things got worse.

Virginia Tech was losing by double digits to FCS Furman at the half. The Hokies managed to escape, but hardly in impressive fashion.

Pitt's late-game decisions doomed the Panthers to a loss at Penn State, despite numerous chances to tie or win.

Georgia Tech fell to The Citadel, an FCS team, in one of the Yellow Jackets' most embarrassing defeats in history.

Since the Wake-UNC game was officially a nonconference showdown, the league lost five games out of conference in Week 3.

And for old times' sake, even former ACC member Maryland got into the act, dropping its first game after cracking the Top 25 in a defeat to Temple.

Bob Davie didn't make his return to his old stomping grounds in South Bend, Indiana, still recovering from a medical issue that hospitalized the New Mexico coach during the Lobos' opener.

Davie returned to the team last week, declining to give much information about his condition, but he didn't travel with the Lobos to Notre Dame, the place he served as head coach from 1997 through 2001.

It was just as well. Notre Dame demolished New Mexico 66-14, running its record to 2-0 versus teams coached by former Irish head coaches. The only other meeting came in 2005, when Tyrone Willingham's Washington Huskies were thumped 36-17. That game came in Seattle, however, and with Davie's absence Saturday, no former Irish head coach has ever made a return to Notre Dame Stadium.

First off, a big congratulations to the SEC officials for keeping their Twitter feed alive through three weeks. It seemed impossible they'd make it through the first Saturday without shutting things down. But that doesn't mean SEC fans have relaxed any.

Just before halftime in the Alabama-South Carolina game, it appeared Rico Dowdle might have stretched across the goal line before his knee touched the ground. The officials called Dowdle down inside the 1 and didn't review the play, leading South Carolina coach Will Muschamp to refuse to comment, noting, "I'll be fined for the rest of my life if I comment on that."

Under-the-radar play of the day

In the end, it didn't matter much as Notre Dameromped to a 66-14 win, but don't ignore the insane catch-and-run from Irish receiver Javon McKinley late in the first half. McKinley looked like Tecmo Bo, breaking six tackles en route to the score. He hauls in the pass at the Irish 40, shrugs off his cover defender, streaks toward the sideline making another defender miss, zigzags back toward the middle of the field, spins, hits the B-button a few times for a little speed boost, then finds pay dirt. It doesn't exactly fill the void left by the lack of the college football video game, but it still was pretty sweet.

Under-the-radar game of the day

P.J. Fleck must have done something amazing in a past life, because he has plenty of karma on his side in 2019. Minnesotamoved to 3-0 with a Tyler Johnson touchdown pass with 13 seconds to play to upend Georgia Southern,35-32. It was the third straight one-possession win for the Gophers, who narrowly beat South Dakota Statewith a late fourth-quarter TD pass in Week 1 and needed overtime to get past Fresno Statein Week 2. Minnesota is only the third team in the past decade to win each of its first three games by seven points or fewer, joining 2011 Iowa State(finished 6-7) and 2012 Oregon State(finished 9-4). So, ladies and gentlemen, your mark-it-in-ink, sure-to-happen 2019 Big Ten West champs: the Minnesota Golden Gophers.

UCFwon its 27th straight regular-season game, demolishing Stanford45-27. The 18-point beating was Stanford's second-worst loss in a nonconference game in the past decade (after last year's 21-point defeat to playoff-bound Notre Dame).

During UCF's regular-season win streak, the Knights are 3-0 against Power 5 foes, all wins by double digits. Saturday's 18-point victory follows a 45-14 win over Pitt last year and a 38-10 win over Maryland in 2017. The Knights will have a chance to add another Power 5 win to their résumé next week at Pitt.

Maryland'sthrashing of Syracusein Week 2 earned the Terrapins a No. 21 ranking in the AP poll, but they're unlikely to spend much time in the Top 25. The Terps fell to Temple 20-17, extending a streak of nearly 13 years without a win while ranked for Maryland.

The last time the Terps won as a Top 25 team was back in 2006, narrowly escaping Miami14-13. They lost a week later to Boston College.

Since then, 93 other teams have won at least one game while in the Top 25, and all but three other Power 5 schools have at least one win while ranked. All four of the winless teams in that span, however, reside in the same conference: Maryland, Indiana, Purdueand Rutgers. 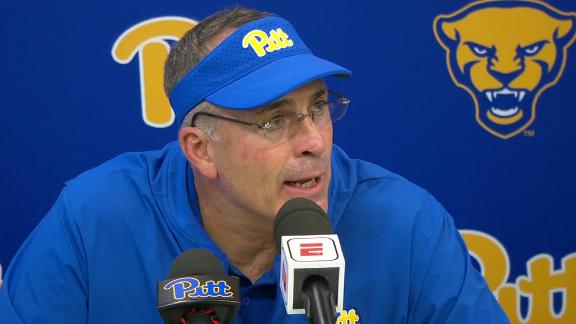 Narduzzi: We're trying to win, not go to OT
Pitt head coach Pat Narduzzi defends his decision to kick a field goal instead of going for it on 4th down because they wanted to win and they knew two scores was the goal. 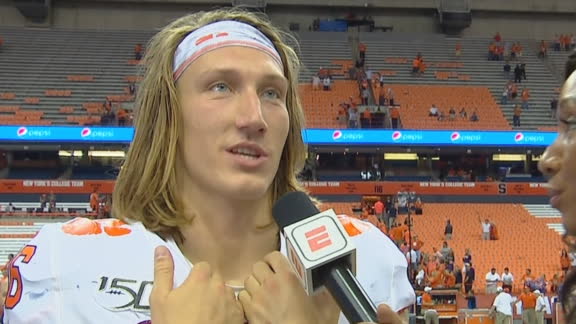 Lawrence pleased with win, emphasizes need for improvement
Trevor Lawrence identifies how Clemson still has much to improve upon, but is satisfied with the positives in the Tigers' 3-0 start. 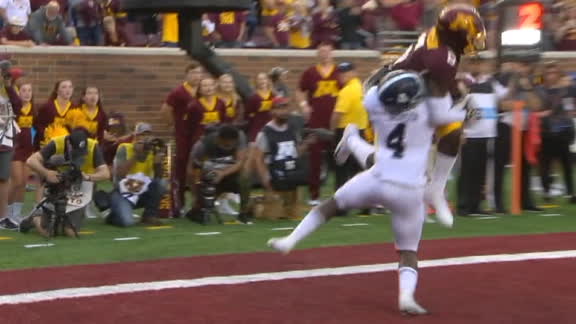 Minnesota avoids upset with last-minute TD
Trailing by four with under a minute to play, Tyler Johnson wins a jump ball in the end zone for his third score of the game, clinching Minnesota's 35-32 win. 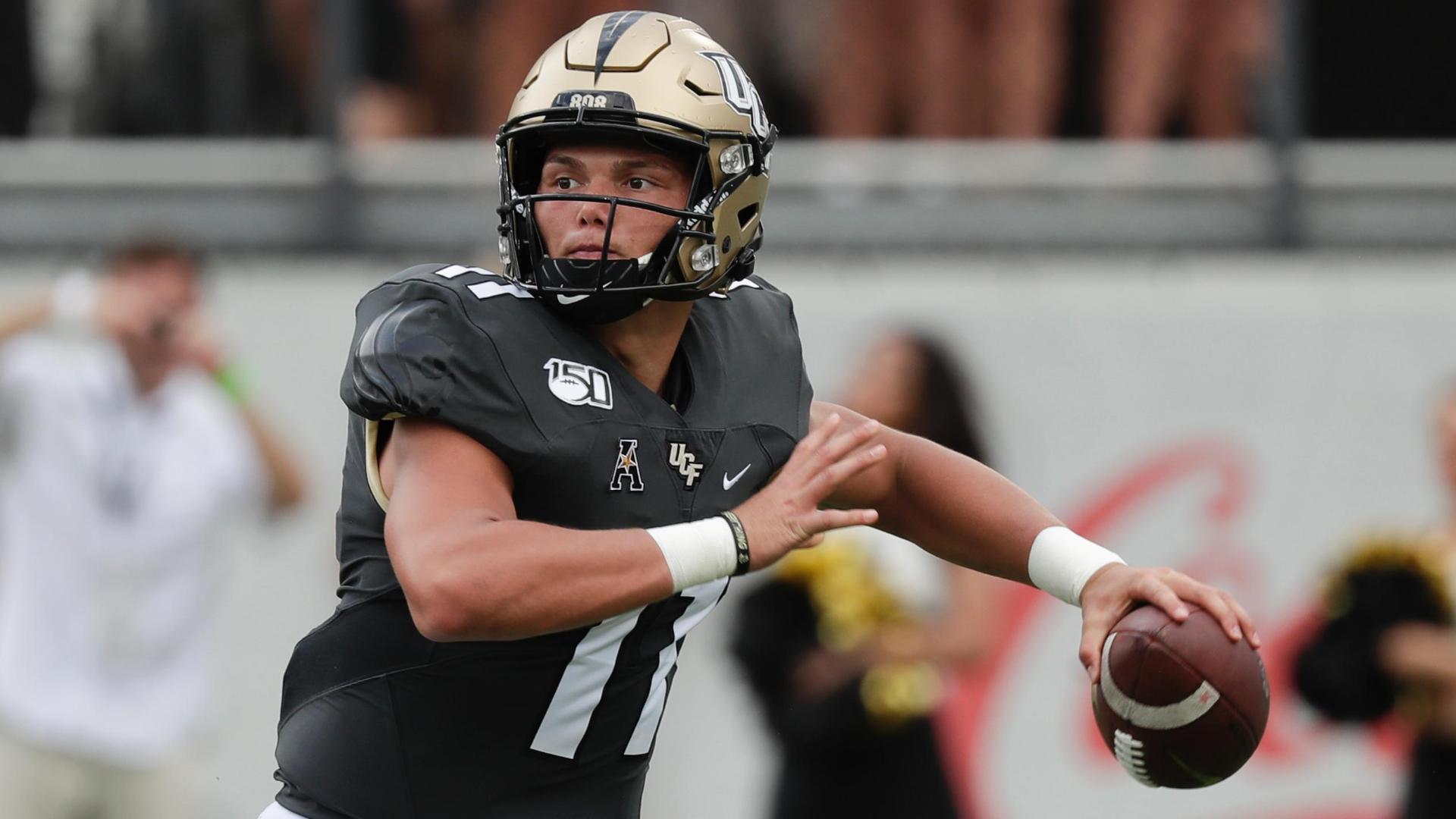