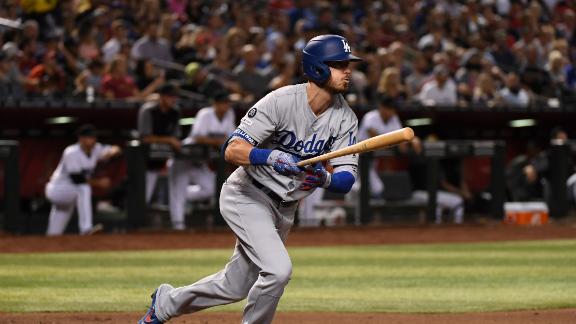 Rojas, the Diamondbacks left fielder, hit a game-tying two-run homer that helped set the stage for the Arizona's 5-4 win over the Los Angeles Dodgers.

Rojas got the ball from his first big league homer in exchange for a ball and a signed bat with the words "Beat LA," as requested by the Diamondbacks fan who made the exchange.

Arizona beat Los Angeles almost as much as the Dodgers beat themselves. A balk by reliever Yimi Garcia sent home the tiebreaking run in the bottom of the eighth inning.

Rojas got his first real taste of the rivalry between the teams.

"It was pretty sick. Big crowd. It was loud," Rojas said. "It was really cool to be a part of that for the first time. I've been definitely struggling a little bit the last week or so, so to get a knock, not only a knock but a game-tying homer, was pretty exciting for my confidence."

With one out in the eighth, Garcia (1-4) slid off the rubber, turned abruptly to check Arizona's Adam Jones at first base and didn't throw over. The move was called a balk and allowed Tim Locastro to trot home from third base.

Locastro said his moving around at third base threw off Garcia and caused the mistake, which Dodgers manager Dave Roberts acknowledged.

"Obviously Locastro kind of spooked him, I think, and the balk. It was kind of an unconventional way to lose the baseball game but sometimes it goes that way," Robert said.

The game ended with a little drama as Escobar nearly booted a hard grounder to third by Justin Turner but recovered and threw out Turner at first base, stranding two runners.

"The last out, so it was a pressure situation to win the game," Escobar said. "So I'm blessed to be able to make a play."

The Diamondbacks stalled the Dodgers' push to clinch the NL West with their fifth straight win. Arizona remained in contention for an NL wild card.

Rojas' blast cleared the right field fence with two outs in the bottom of the seventh, just after Jarrod Dyson beat out an infield hit and put the tying run on base.

Dodgers starter Tony Gonsolin lasted two batters into the sixth inning and recorded the first RBI of his career. He held the Diamondbacks scoreless until Escobar's two-run home run, and was charged with two runs on three hits with five strikeouts and two walks.

"That ball with Escobar, tip your cap. He just got me," Gonsolin said.

The Dodgers' Enrique Hernandez hit his second double in the seventh, a line drive that Rojas misjudged in left field and watched sail over his head. The Dodgers cashed in with two outs, when Matt Beaty drove in their fourth run with a single.

The Dodgers scored twice in the second, a rally that started with Corey Seager's crafty slide into second base for a hustle double. Seager switched hands as he slid headfirst into the bag and avoided the tag, though the throw from left field beat him.

Hernandez doubled into the left field corner to score Seager, and Gonsolin rolled a single into shallow right field that scored Hernandez.

In the third, Turner worked a 14-pitch walk from Gallen, and came home on Cody Bellinger's one-out triple that came to a stop in the right field corner.

Nick Ahmed's fifth inning double for the Diamondbacks was his 122nd hit of the season, a career high.

An MRI on Muncy, who is batting .253 with 33 home runs and 87 RBI, revealed a small fracture in the wrist, the result of him being hit by a pitch in Wednesday night's game at San Diego.

X-rays didn't reveal anything on Thursday, but a further examination Friday showed the extent of his injury.

The Dodgers activated infielder Kristopher Negron from the injured list to take Muncy's place on the roster. Negron missed 10 games after going on the IL on Aug. 20 with neck stiffness.

Former Diamondback A.J. Pollock, who spent his first seven seasons with Arizona, heard the boos from the home crowd as a he came up to pinch hit for the Dodgers in the seventh. He struck out and heard jeers.

Diamondbacks reliever Archie Bradley was booed by Dodgers fans in the crowd when he came on in the eighth, likely because of the exchange of words he was in the middle of after a save at Dodger Stadium on Aug. 9.

Extended protective netting will be in place at Dodger Stadium when the team returns home on Sept 2, the team announced Friday. The Dodgers had replaced the netting behind home plate and above both dugouts with a 33-foot net. An additional 124 feet was added down both baselines.

Dodgers: OF Alex Verdugo is in Arizona working his way back from a right oblique strain, which has him on the injured list since Aug. 6.

Diamondbacks: All-Star IF Ketel Marte wasn't in the lineup Friday due to lingering hamstring issues. ... OF David Peralta had surgery on his right shoulder Friday. He's out for the season.