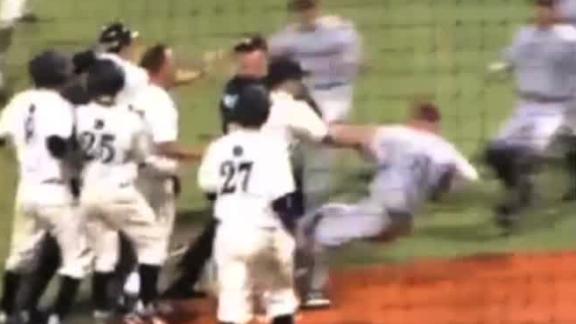 A brawl erupted and marred another college baseball game Wednesday night, as the benches cleared in the 10th inning of a game between Arkansas-Little Rock and Central Arkansas in Conway, Ark.

The melee, which was captured in several videos posted online, was touched off after an argument in the infield, just feet in front of the plate, between Arkansas-Little Rock coach Scott Norwood and Central Arkansas coach Allen Gum, which resulted in Norwood face-first in the dirt with players quickly converging.

Video of the incident taken from several angles in the stands shows the two coaches yelling at each other from across the diamond and eventually reaching one another at the front of the infield before coming nose to nose as umpires attempt to separate them.

Another coach or player from Central Arkansas can then be seen approaching and shoving Norwood to the ground. As Norwood spins and lands face-first in the dirt, the brawl begins, and players start shoving each other en masse.

The mob of players ends up next to the stands behind the plate, and one player at the edge of the scrum can be seen shoving another player to the ground and punching him before the group of players, coaches and umpires overtakes them.

Fans can be heard gasping throughout and yelling, "No! No!"

None of the video available late Wednesday night captured the end of the brawl.

Play was interrupted for about 20 minutes, according to the website of the Central Arkansas student newspaper, The Echo.

According to newspaper, there were no injuries reported, and the game ended in the 11th inning with Central Arkansas winning 5-4.

A game last Tuesday between No. 1 Florida State and Florida also involved benches clearing and players -- including FSU reliever and Heisman Trophy winner Jameis Winston -- spilling onto the field. That scuffle resulted in the four-game suspension of Florida State outfielder DJ Stewart.

Brawl Erupts During Arkansas College Baseball Game
A brawl erupted Wednesday night as the benches cleared in the 10th inning of a game between Arkansas-Little Rock and Central Arkansas.