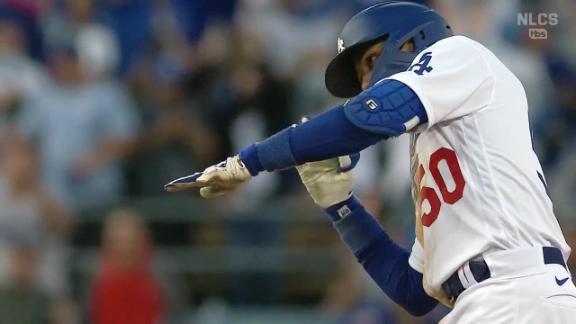 Bellinger hit a tying, three-run homer and Mookie Betts then lined an RBI double in the Dodgers' eighth-inning rally, storming back to beat Atlanta 6-5 Tuesday and cutting the Braves' lead in the series to 2-1.


"It's hard to remember a bigger hit, with what was at stake," Dodgers manager Dave Roberts said. "I'm kind of exhausted now."

Some of the 51,307 fans had already left when the Dodgers were down to their final five outs and facing the daunting prospect of a 3-0 deficit in the series. Bellinger swung and missed two pitches down the middle for strikes, going to his knees in the dirt.

"Ball's coming in hard, some shadows you're dealing with, so I saw it well and I just tried to barrel it up," Bellinger said. "Just continue to barrel up the ball and pass the baton."

Bellinger drove a shoulder-high, 95.6-mph fastball from Luke Jackson into the right-field pavilion, igniting the blue towel-waving crowd and reviving the hopes of the defending World Series champions.

"Sad thing is I would do the same thing again," Jackson said. "I was trying to throw a fastball up and away. I actually threw it better than I thought I threw it. Out of my hand, I was like, Oh, that's a ball. It's too high.' And no, it wasn't too high. Good player, put a good swing on it and pretty remarkable."

"One of our strong suits is not worrying about what happened yesterday, focusing on right now," Betts said.

Game 4 is Wednesday at Dodger Stadium.

"We can do it, we're confident," Braves manager Brian Snitker said. "There is going to be no residual effects after this game."

The Dodgers had lost all 83 previous postseason games - in both Los Angeles and Brooklyn - in which they trailed by three or more runs in the eighth inning or later.

But that's history now. And so are Bellinger's recent struggles.

The 2019 NL MVP, Bellinger batted a miserable .165 this year with a paltry .240 on-base percentage and 94 strikeouts in 315 at-bats. He helped redeem himself last week with a tiebreaking single in the ninth inning of the decisive Game 5 of the NL Division Series against the rival Giants at San Francisco.

"Fresh start," Bellinger said of the postseason. "At least for me this year it's a fresh start. You know, a tough regular season but you know, I felt good towards the end of the season, and just try to continue that feel all the way through."

Bellinger's done this before, too. After the Dodgers overcame a 3-1 deficit against Atlanta in the NLCS last year, his tiebreaking home run in the seventh inning won Game 7.


With the cheering, chanting crowd on its feet in the ninth, Kenley Jansen struck out the side to earn the save, the ninth pitcher used by the Dodgers. They ran through a combined 15 in the first two games.

Staggered with back-to-back walk-off losses in Atlanta, the Dodgers returned home, where they've dominated the Braves in recent years and were an MLB-best 58-23 during the regular season.

It sure looked like they'd end that skid after leading 5-2 in the fifth.

After Corey Seager's two-run shot gave them an early lead, the Dodgers' offense stalled out from the second to eighth innings, with only five hits.

"It's never going to just be easy and handed to us," Bellinger said. "We got to fight for it."

But the wild-card winner staged another improbable comeback late, just like the Dodgers have done so often this postseason.

They beat St. Louis in the NL wild-card game, then edged 107-win San Francisco in the NLDS.

Despite trailing the best-of-seven series, the Dodgers have grabbed the momentum. They're at home for the next two games, knowing they overcame that 3-1 deficit against the Braves in last year's NLCS at a neutral site in Arlington, Texas.

The Braves built their lead with a bunch of singles, pounding out 12 hits, and a dropped flyball by novice center fielder Gavin Lux.

Freddie Freeman broke out of his slump, going 3 for 4 with a walk and a run scored after he struck out seven times in eight at-bats in the first two games.

Adam Duvall went 2 for 5, driving in two runs and scoring another for the Braves. Every Atlanta batter got on base at least once.

Tony Gonsolin got the victory, recording one out in relief.

Jackson took the loss after getting hammered in the eighth.

Eddie Rosario and Freeman jump-started the Braves with back-to-back singles off Walker Buehler to open the game.


The Braves quieted the crowd of 51,307 while knocking around Buehler and taking a 4-2 lead in the fourth.

Atlanta got RBI singles from Joc Pederson, Duvall and Dansby Swanson, and Buehler walked Rosario on four pitches with the bases loaded to force in another run.

Swanson's hit off his former Vanderbilt teammate went off the glove of shortstop Seager and rolled into left, allowing Pederson to score the go-ahead run as the Braves batted around.

Seager's wasn't the only miscue in the fourth. Lux chased Austin Riley's double to the warning track in right-center only to have the ball go off his glove to keep the inning going.

Buehler pitched on short rest for the first time in his career in Game 4 of the NLDS. He didn't the win, but the Dodgers tied the series and forced a deciding fifth game.

Atlanta extended its lead to 5-2 in the fifth on Duvall's RBI single that scored Ozzie Albies, who walked and stole second.

The Dodgers had Charlie Morton on the ropes in the first, when he tied a postseason record with four walks on 34 pitches. The right-hander walked leadoff hitter Betts and Seager followed with a homer to center for a 2-0 lead.

Morton then loaded the bases on consecutive two-out walks to Justin Turner, Lux and Bellinger before Taylor lined out to short to end the inning.

Hall of Fame broadcaster Vin Scully gave the traditional pregame call of "It's time for Dodger baseball!" via video from his Los Angeles-area home. He then tapped his fist on his heart, drawing cheers from the crowd. Scully, who turns 94 next month, retired in 2016 after 67 years calling games for the franchise in Brooklyn and LA.

LHP Julio Urías starts for the Dodgers in Game 4 on Wednesday. The Braves were planning a bullpen game.