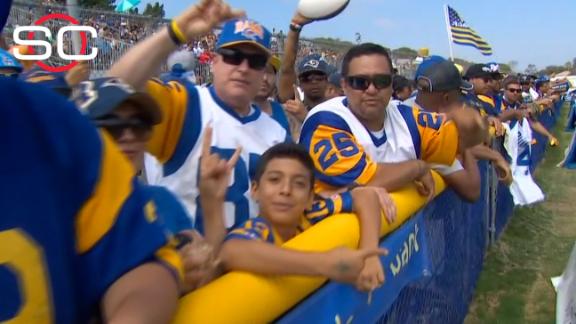 From the moment they stepped off the team bus Monday, the Rams were serenaded by several thousand jersey-wearing, flag-waving fans celebrating a Southern California homecoming. They chanted "L.A. Rams!" while the players took the practice fields in Oxnard, an hour west of Los Angeles, and they held banners reading "Welcome Home!" and "We Missed You!"

The Rams are in Ventura County for three days of workouts at the Dallas Cowboys' training complex, and they're providing a tantalizing appetizer for fans who know the franchise is weighing a return to Los Angeles, its home for 49 years prior to 1995.

Although a decision won't be reached for several months, the fans who never left seized the chance for a reunion after two decades.

"It was live," Rams tight end Jared Cook said. "I just couldn't believe it, man. I think we had a lot more fans than Dallas."

Rams coach Jeff Fisher has stayed well away from the relocation drama, which also encompasses the Oakland Raiders andSan Diego Chargers as the three clubs jockey for new stadiums and untapped riches. However, Fisher is a Los Angeles-area native and USC product, which gives him extra insight into the passion in the stands.

"I got to go home, and Mom cooked me a home-cooked meal last night, so that was good," said Fisher, the Los Angeles Rams' defensive coordinator in 1991. "I grew up here and went to school here. It's a great area, and ... they miss their pro team. I think it's understandable, and that's why there's so much talk about the potential of bringing a franchise here."

Even Rams owner Stan Kroenke turned up at the Cowboys' training complex, which encompasses most of a hotel just a few miles from the Pacific Ocean.

Kroenke got to meet Foles, his new quarterback, for the first time before watching the joint workout with Cowboys owner Jerry Jones from the observation tower between the practice fields.

Kroenke declined to speak to reporters, but he couldn't help seeing a poster of his own oversized head floating through the crowd or hearing the chants of his name from fans such as Ray Soto.

A Rams devotee since 1960, Soto made the two-hour drive from Bakersfield to Oxnard to attend practice with his son and grandson. While his brothers gave up on the team after its move to the Midwest, the Lompoc, California, native stayed faithful to the franchise.

"I feel sorry for the St. Louis fans, and I appreciate them taking care of our team," Soto said. "I know for sure [the Rams are] coming back because Kroenke knows how much value they'll have to bring them back here."

Kroenke, a billionaire who owns a home in Malibu, rarely attends camp in Missouri. He has purchased land in Inglewood and partnered with developers to build a palatial football stadium capable of housing two NFL teams -- but he has done it all without explicitly saying he intends to move the Rams.

Inglewood mayor James T. Butts Jr. also turned out for the Rams' Oxnard trip. He said the stadium site is getting utility and sewer lines, and he believes it will be ready for construction in mid-December.

Butts was impressed -- but not surprised -- by the fan turnout in Oxnard, about 60 miles from the flattened acres in Inglewood where that state-of-the-art stadium could begin to rise this winter.

"I think it's a huge message to the Rams' popularity here in Southern California," Butts said. "The Rams are the team that most of us as children grew up with. Roman Gabriel. Jack Snow. The Fearsome Foursome. That is part of our DNA growing up, so there is no team that can claim they are more integrated into the psyche of the people that were old enough to attend football games than the Rams. That's hands-down. And then would come the Raiders."

For this three-day engagement, the Southern California fans organized $30 round-trip bus rides and packed the parking lots several hours before practice. They plan to wrap up each day with food, drinks and partying at a nearby restaurant.

Without definitely picking a side in the three-team derby for Los Angeles, Jones realizes the Rams matter greatly in L.A. and beyond.

"What I do think is [the Rams] have such a traditional visibility and a traditional following here in Southern California," Jones said. "And that's the main positive that they have -- and that they've got a great owner and they've got a great franchise. It's a good thing for the NFL to have these teams that have the qualifications they have to think about this Los Angeles market."