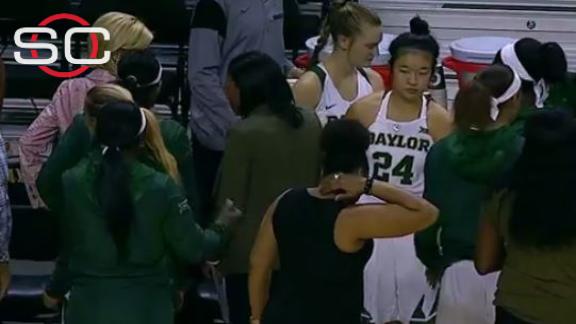 WACO, Texas -- No matter how many substitutions Baylor coach Kim Mulkey made, the lead kept growing.

When the game was over, the only thing left to do was count the records.

In the biggest Division I women's basketball rout ever, No. 3 Baylor overwhelmed Winthrop 140-32 Thursday.

"I tried and played tons of people, in and out of the lineup, called timeouts, trying to get people off the floor," Mulkey said.

When they shook hands at the end, Eagles coach Kevin Cook told Mulkey he appreciated her efforts.

"I am most grateful that coach Cook recognized that. Kevin said thank you," she said. "I tried everything I knew to try, because I respect him. But more importantly, I respect the game."

"What do you say after a game like that?" Cook said. "Baylor has a phenomenal program, Kim is an outstanding coach, she's surrounded herself with an excellent staff."

"We've played some highly ranked teams this season. And by far, Baylor is right at the top. You saw the game, you see the stats. They hurt us inside, they hurt us with 3-pointers. They're awfully good," he said.

Mulkey began rotating her players in and out early in the first quarter. No one was on the court for more than 21 minutes and all 12 players got double-figure minutes.

Baylor leading scorer Alexis Jones, who's had knee trouble, sat out for the second straight game to rest. Khadijiah Cave finished with a career-high 25 points.

The much taller Lady Bears matched their opening burst with a 21-0 run to start the second quarter.

"I was made aware after the game of all the records. You're happy for players who break records, and when you get a chance for them to stay in another minute to get another basket, you do it because it's not always going to be that way," she said.

Winthrop did best Baylor in one statistical category -- foul shooting percentage. It made 12 of 15 while the Lady Bears were 13 of 20.

The Eagles keep attacking the basket the entire game "and that's good," Cook said. "And I thought we shot free throws pretty well. This is a young group, and we're going to continue to work with them."

Baylor's point total was the second highest in women's Division I history, topped only by the 149 scored by Long Beach State in 1987.

The biggest rout between two Division I teams in women's basketball had been in 1989 when Louisiana Tech topped Texas-Pan American 126-25.

The crowd of 6,440 at the Ferrell Center was boosted by a large contingent of kids from elementary schools, and they saw Baylor rushed to a 38-6 lead in the first quarter.

Lauren Cox and Alexis Prince both scored 23 points for Baylor. Kalani Brown had a double-double with 17 points and 12 rebounds, and Beatrice Mompremier had 16 rebounds.

Danyael Goodhope added 10 for Winthrop. The Eagles made only three field goals in the first half.

Winthrop: The Eagles have played a rough schedule, but they hadn't seen anything like the Lady Bears. They get credit for pushing toward the hoop, never shying away from Baylor's big and talented front court. ... Cook said the Eagles tried to pick their poison defensively, but "we didn't pick any." The Lady Bears scored 84 points in the paint and went 13 for 20 from 3-point range.

Baylor: All of the Lady Bears needed to get back in the flow after a nine-day layoff for final exams, and they did just that. Nobody played longer than Brown's 21. ... The Lady Bears eclipsed the previous highest point total in Division I women's play this season, the 129 scored by South Florida against St. Francis (Pa.) on Wednesday night.

Winthrop: The Eagles have two games left on the nonconference slate. They return home to meet Mercer on Sunday, then it's off to No. 12 Ohio State on Wednesday.

Baylor: Another long rest is ahead, with a full two weeks off before opening Big 12 play against Kansas State at home Dec. 29.