Bill Belichick: All Patriots feel like they could have done better 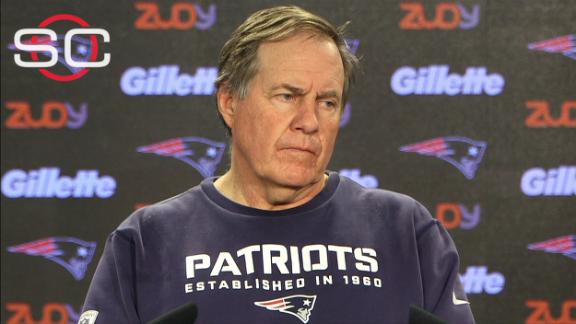 ESPN
By Mike Reiss
FOXBOROUGH, Mass. -- One day after New England Patriots kicker Stephen Gostkowski said he felt he cost the team a chance to win the AFC Championship Game by missing an extra point in the first quarter, coach Bill Belichick said Sunday's 20-18 loss to the Denver Broncos didn't fall on any single player.

"Steve is a great kicker. He had a great year for us," Belichick said in his early-morning news conference at Gillette Stadium. "I think every coach or player who participated in the game wishes there was a couple things they could have done differently. I feel that way. Everybody I've talked to feels that way. I can't imagine that anyone who participated in the game doesn't feel that way. ... I feel like it's my fault, I'm sure all the other players who played feel like it's their fault."

Gostkowski's miss ultimately forced the Patriots to go for a two-point conversion after slicing the Broncos' lead to 20-18 with 12 seconds remaining. Players had rallied around Gostkowski after the game.

On Monday morning in his annual wrap-up news conference, Belichick wasn't interested in getting into a discussion on the NFL's new extra point rule for 2015, which made the play more competitive by making it a 33-yard attempt. Belichick had been an advocate of the change.

"Whatever the rules are, we play by them. We don't make the rules. That's decided by the league," Belichick said, a common refrain he has used when asked similar questions in the past.

One day after the loss that he described as a "crash landing," the sleepy-eyed coach said he reviewed the film and had a lot of respect for the way the Patriots competed.

"I'm proud of it, guys battling to the very last play," he said, describing the team as "tough, competitive and hard workers."

"Probably a couple plays, a couple calls, a couple whatevers that we'd all like to have back. In a close game like that, I think you always feel that way."

But Belichick wasn't second-guessing himself for one decision that has drawn criticism in some corners: going for it on fourth-and-1 from the Broncos' 16-yard line with 6 minutes, 3 seconds remaining in regulation, when the Patriots trailed 20-12. An incomplete pass off play-action turned the ball back over to the Broncos.

"At that time, there was no hesitation in doing that," Belichick said, citing "time, and number of possessions you have left, and what you need to do."

Without elaborating, he also said it was a "combination of factors" that led to his decision to receive the opening kickoff after winning the opening coin toss, which was rare for the Patriots. He said potentially bad weather in the second half, however, wasn't part of the consideration.

Belichick added that the team's malfunctioning tablets on the sideline in the first half are commonplace and that it had no effect on the outcome of the game.

"We had some opportunities, but in the end, we just came up a little short," Belichick said. "That's obviously a disappointing feeling at this time of year. Turn the page here and move on, and start the process all over again. That's where we are."

Belichick said he has already turned the page, which includes getting more involved with college scouting -- something he annually does at this time of year.

If there was any doubt, Belichick sounded like he was committed for the 2016 season, which will be his 17th straight as Patriots coach. He turns 64 in April.

"The emotion of the game is still with all of us, but the process still has to start," he said, "so we'll start it and do things in the normal course that we do them."