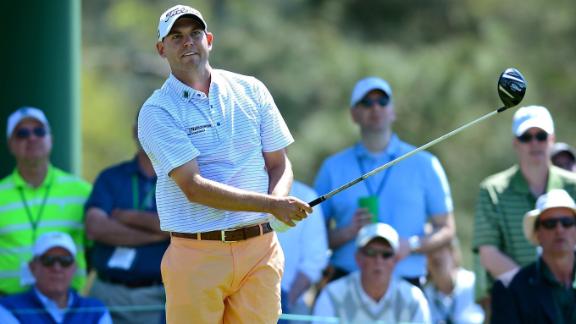 AUGUSTA, Ga. -- Adam Scott soaked in the applause, with cheers greeting him on every fairway and every green before receiving what amounts to golf's version of a standing ovation as he walked up the hill to the 12th tee.

The spectators that gather at the apex of Augusta National's Amen Corner rose out of their seats as he approached, a memory that the defending Masters champion said Thursday would stick with him forever.

"Then I went and hit it in the water," Scott said, shaking his head, laughing.

It might have ruined the moment, but it didn't ruin the round for Scott, who shot 3-under-par 69 to trail Bill Haas by a stroke on a tricky first day at the Masters.

Haas, 31, who attended the Masters for years to watch his father, Jay, compete in the tournament, set the pace with a 68 that included a birdie at the 18th hole.

It was the first time Haas shot in the 60s in his 17th round at Augusta National, and was good for the one-stroke advantage over a trio of major champions -- Scott, Louis Oosthuizen and Bubba Watson. Watson was the only player without a bogey on his card.

Another son whose father competed in the Masters, Kevin Stadler, was among a group of seven players who shot 70 to trail by two strokes. Stadler and his dad, Craig -- the 1982 Masters winner -- became the first father and son duo to compete in the same Masters. Craig shot an 82 on Thursday.

There were 19 players -- including Rory McIlroy, Jordan Spieth, Fred Couples and Rickie Fowler -- within 3 shots of the lead.

"I was leading last week after the first round (at the Shell Houston Open) and finished 37th, so I know there's tons of golf left," said Haas, whose dad played in 22 Masters, with a third in 1995 as his best finish. "And maybe understanding that, I know that I can't expect too much. You've just got to go out there and keep playing golf, try to hit that fairway on No. 1 tomorrow."

The opening round of the first major championship of 2014 brought near-perfect conditions, with sunny skies and comfortable temperatures that reached into the 70s.

The wind did not blow hard, but it blew enough to cause plenty of problems, especially at famed Amen Corner -- the 11th, 12th and 13th holes.

"The golf course is winning so far," said Butch Harmon, the noted swing instructor whose father, Claude, won the 1948 Masters. "You'd have thought in these conditions, the scoring would be better."

Added McIlroy: "Setup was much more difficult than it has been in the past. Tomorrow afternoon the greens will be (even) firmer. I wouldn't mind if they were a little softer. But it was a tough setup. I think that they really wanted to do that, they didn't want the scores to get too low. You can see by the boards nobody is going too low."

Among those who got off to rough starts were the last three major championship winners.

Jason Dufner, the PGA champion, made a 9 on the par-5 13th en route to an 80. Phil Mickelson, who won the Open Championship last year, made a triple-bogey 7 at the seventh and doubled the par-5 15th after hitting his third into the water. He shot 76. Justin Rose, the reigning U.S. Open winner, shot 76.

Sergio Garcia had 74, Jason Day 75 and Luke Donald a 79 that included a 2-stroke penalty for touching the sand on the ninth hole after his first shot stayed in the bunker.

Scott got to the top of the leaderboard with a birdie at the 10th, his fourth of the day. But his tee shot at the par-3 12th with a 9-iron from 158 yards came up woefully short, landing on the bank and bounding back into the water.

That led to a double-bogey 5 that knocked him from the top of the leaderboard, but he bounced back with a birdie at the 14th. And although he had three-putt pars on the 13th and 15th holes, Scott was pleased with the first round of his title defense.

"I was really very happy with the way I played today tee to green," Scott said. "It was really how you hope to come out and play at any major, and especially the Masters. I was really solid."

Haas, who won the PGA Tour's FedEx Cup three years ago, has five PGA Tour titles but has never finished among the top 10 in a major championship, his best a tie for 12th at the 2011 PGA Championship.

After a bogey at the first, he birdied the second, fourth and eighth holes, added birdies at the 13th and 14th holes, dropped a shot at the 17th but got it back on No. 18 to post a score that would hold up as the first-round lead.

The bad news for Haas is that of the 77 previous winners of the Masters, only nine had the outright first-round lead. In fact, there have been 283 stroke-play majors since the first Masters was held and only 8.5 percent of their winners led after the first round.

Bill Haas In The Lead
Bill Haas, 4 under par, leads at the Masters after the first round.