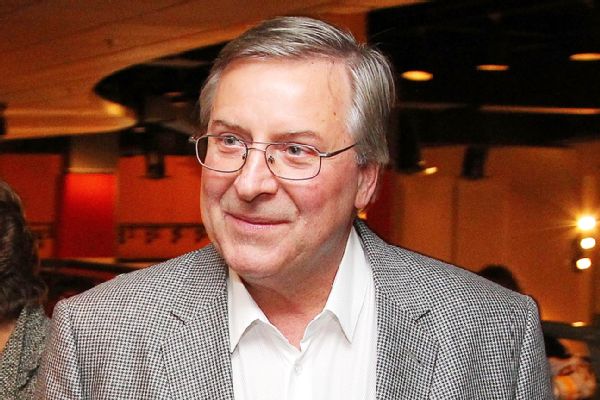 ORCHARD PARK, N.Y. -- Buffalo Bills owner Terry Pegula decided to fire Rex Ryan when the coach asked about his future beyond this season after a weekly conference call on Dec. 27.

"I was asked a point-blank question, and based on the discussions we've been having all year, I felt it was better to tell Rex we were going in a different direction," Pegula told The Associated Press in an interview Monday.

In his season-ending news conference Monday, Bills general manager Doug Whaley denied having any involvement in Ryan's firing last week, insisting he was not aware of why Ryan was fired.

"We just finished our weekly phone conversation with Terry, myself and Rex," Whaley said of Ryan's firing last Tuesday. "Rex asked to speak to [Pegula] privately. After that, I was informed that Rex would no longer be our coach. I wasn't privy to the conversation, so I cannot get into those details.

"I look at it this way: I'm the GM of the football operation. I was told by my boss that I would no longer be working with a certain person. My role is not to figure out why. My role is to take that information and go forward and put this organization in the best possible way to win football games. So for me, I did not ask."

Pegula told the AP that Whaley had input throughout the season on the Bills' problems but never had a conversation with ownership about whether Ryan would be fired.

The Bills' owner also disputed any idea of dysfunction within the organization, saying everybody was "on the same page. We're busy busting our asses."

Pegula has not answered questions from local reporters since Ryan's introductory news conference in January 2015. He issued a five-sentence statement when Ryan was fired, wishing Ryan well and expressing disappointment in a season that ended Sunday with a 7-9 record.

Whaley, however, said Monday he "speak[s] for the ownership and the team president" in holding his NFL-mandated season-ending news conference.

Asked how he can speak for ownership about Ryan's firing if he did not know why Ryan was fired by ownership, Whaley said, "I can't give you the particulars of what happened in that conversation; I can just tell you that I was informed that he was not going to be our coach going forward."

Both Ryan and Whaley reported directly to Pegula under the Bills' organizational structure last season. Whaley said he does not know whether that structure will remain in place when the Bills hire their next coach.

The Bills announced last week that Whaley, who will enter his fifth season as Bills general manager in 2017, will lead the team's coaching search. Whaley was assistant general manager in 2013 when the Bills hired Doug Marrone, and Whaley said Monday he was part of a "committee approach" when Ryan was hired in 2015.

"This one will fall squarely on my shoulders, with the help of [player personnel director] Jim Monos," he said. "So we're going to approach it that way, and I have full confidence in myself and the plan that we have in place that we're going to go out and get the best guy for the Buffalo Bills."

Despite leading the search, Whaley said the Pegulas will have final say over who becomes the Bills' next coach. Team president Russ Brandon will not be involved, a decision Whaley attributed to Brandon's "expanding role" with the Pegulas' other businesses.

Whaley disagreed with speculation that he did not cooperate well with Ryan or Marrone during their tenures as Bills coaches. He also brushed off the idea that his remaining as general manager will deter candidates who would want final say over the Bills' roster.

Interim coach Anthony Lynn will interview with the Los Angeles Rams and the San Francisco 49ers, sources said, and is expected to keep his options open outside of Buffalo.