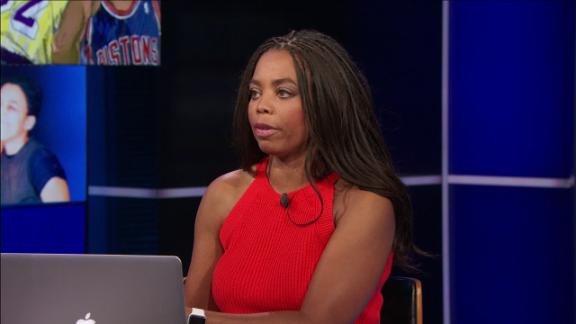 The Los Angeles Times reported Griffin would meet with the Suns on Saturday, and 98.7 FM Arizona Sports saidMillsap would talk with Phoenix on Sunday.

Sources told ESPN's Ramona Shelburne that Griffin has strong interest in the Suns.

Multiple sources told Shelburne that while the Clippers are focused on retaining him in the wake of the trade of Chris Paul, there's some question as to whether they would offer the full max of $175 million.

Griffin has spent his entire career with the Clippers, averaging 21.5 points and 9.4 rebounds on 52 percent shooting in seven seasons. He was due to make $21.4 million next season.

Griffin was the No. 1 overall pick by the team in the 2009 draft. He missed the 2009-10 season because of a left knee injury, and a variety of injuries have seen him miss 83 games in the past three regular seasons.

Sources told ESPN's Michael Eaves earlier this week that Griffin may not be ready for the start of the 2017-18 season and could possibly be out until December due to a toe injury that cut short his postseason this year.

A separate source told Shelburne that the Clippers believes Griffin's toe will be healed and he'll likely be ready for the start of the season.

Millsap, a four-time All-Star, had a $21.4 million option for next season that he said he planned to opt out of following the Hawks' first-round exit from the playoffs. Atlanta could offer to re-sign him for a projected five-year deal worth up to $205 million. If another team was interested, it could offer him a four-year contract worth $158.4 million.

Millsap averaged 18.1 points and 7.7 rebounds last season. His name was floated around at the trade deadline, but Atlanta ultimately decided to hang on to him en route to a 43-39 record and the No. 5 seed in the East.