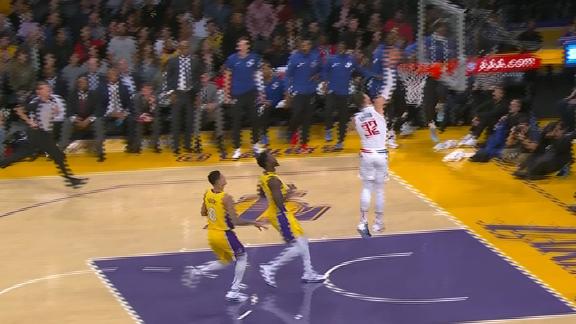 LOS ANGELES -- LA Clippers power forward Blake Griffin scored a game-high 24 points in a 121-106 win over the Los Angeles Lakers, his first game since spraining his left MCL more than a month ago.

Griffin, a five-time All-Star, had been practicing with the Clippers this week and was assigned to the G League's Agua Caliente Clippers of Ontario on Wednesday for additional five-on-five scrimmages. He had previously played on Nov. 27 in a win over the Lakers, a game he left after becoming tangled with Clippers guard Austin Rivers and Lakers guard Lonzo Ball in pursuit of a loose ball.

Prior to the game, Clippers coach Doc Rivers said that Griffin's minutes on Friday night would be monitored but not restricted. Griffin ultimately played 32 minutes in the win, a scant less than his season average of 34.5 per game.

Griffin's first field goal came less than two minutes into the first quarter, when he threw down a breakaway dunk courtesy of a leading pass from point guard Milos Teodosic. All but three of Griffin's shots from the floor occurred in the paint. He converted six of his 15 field-goal attempts, went 11-for-12 from the line, collected six rebounds and dished out six assists.

"What I liked most was that Blake just kind of joined in," Clippers coach Doc Rivers said. "Everybody still got their space and we still attacked. It was good to see Lou [Williams] and Austin [Rivers] stay aggressive with Blake on the floor."

The Clippers initially set the goal for Griffin's return at eight weeks, but Griffin said following the game he knew early in the process that he could accelerate the timetable.

"Through the whole rehab process, I never had a moment where I felt like, 'Oh, I can't do that,'" Griffin said. "There are all these little steps I had to take to be able to eventually play and I hit all of those."

Griffin, a self-identified sports science geek, credited the Clippers' performance infrastructure and staff for much of the progress, two areas where the organization has invested heavily over the past year.

"Our training staff put together one of the best rehab programs I've seen, doing simulated game conditioning, high-altitude training and all this crazy stuff," Griffin said. "I'm actually recovering at a better rate now than I was heading into the season."

Before being sidelined, Griffin, who signed a five-year, $173 million contract during the offseason, was averaging 23.6 points per game with a true shooting percentage of 54.2, along with 7.9 rebounds and 5.1 assists. The Clippers, who were 8-11 when Griffin was sidelined after a Nov. 27 win over the Lakers, compiled a record of 6-8 in his absence.

Austin Rivers left the game in the third quarter with a strained right Achilles tendon, and left the arena on crutches. The team will evaluate his condition on Saturday.