X-rays on Lillard's finger were negative, the team announced. Lillard, who scored 18 points on 6-of-14 shooting in 30 minutes, did not return to the game.


Blazers coach Terry Stotts said after the game that it's too early to know Lillard's status for Saturday's Game 3 at the ESPN Wide World of Sports Complex at the Walt Disney World Resort in Lake Buena Vista, Florida.

Lillard appeared to injure his hand while reaching on defense during a drive to the basket by Lakers star Anthony Davis. Lillard was shaking his head and appeared frustrated as he left the sideline while being attended to by his team's athletic training and medical staff.

"It's just sore. A little bit tender to the touch," Lillard said postgame.

He said he had never dislocated a finger before and that he wasn't sure how it happened but that he felt it right away. He said he didn't want to look at the finger, but when he did, he started trying to pull it back into place.

Lillard entered the game having carried his team through the seeding round and into the first-round series against the Lakers, the Western Conference's top seed. He was averaging 36.6 points through 10 games in the Florida bubble, the most of any player there, and was unanimously voted the MVP of the bubble in recent days.

He scored 34 points in the Trail Blazers' Game 1 win over the Lakers on Tuesday.

Asked whether the Blazers were due for a bad game, Lillard said, "I wouldn't say we were due."

"I do think that the game balances itself out," he said. "Some guys come out and have a huge night and then the next night they can be cooled off. Some teams play really well for stretches and then they have that game where they cool off. I think we've played really well offensively since we've been here. I wouldn't say we were due, but it happens. Sometimes you have a tough night on that end of the floor. Tonight, we had a tough night on the offensive end of the floor." 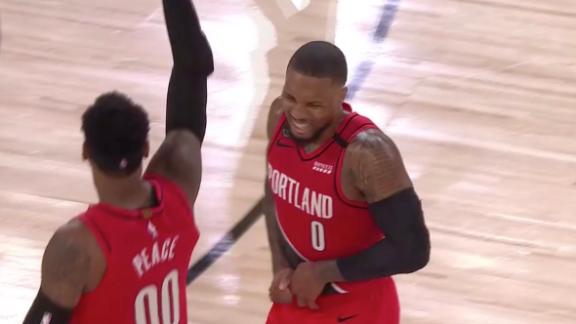 Lillard dislocates finger on Davis' foot
Damian Lillard reaches in for a steal on Anthony Davis and ends up having his finger dislocated on Davis' foot, causing him to sit out the remainder of Game 2 vs. the Lakers. 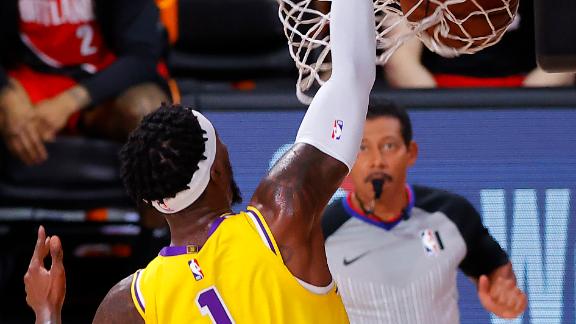