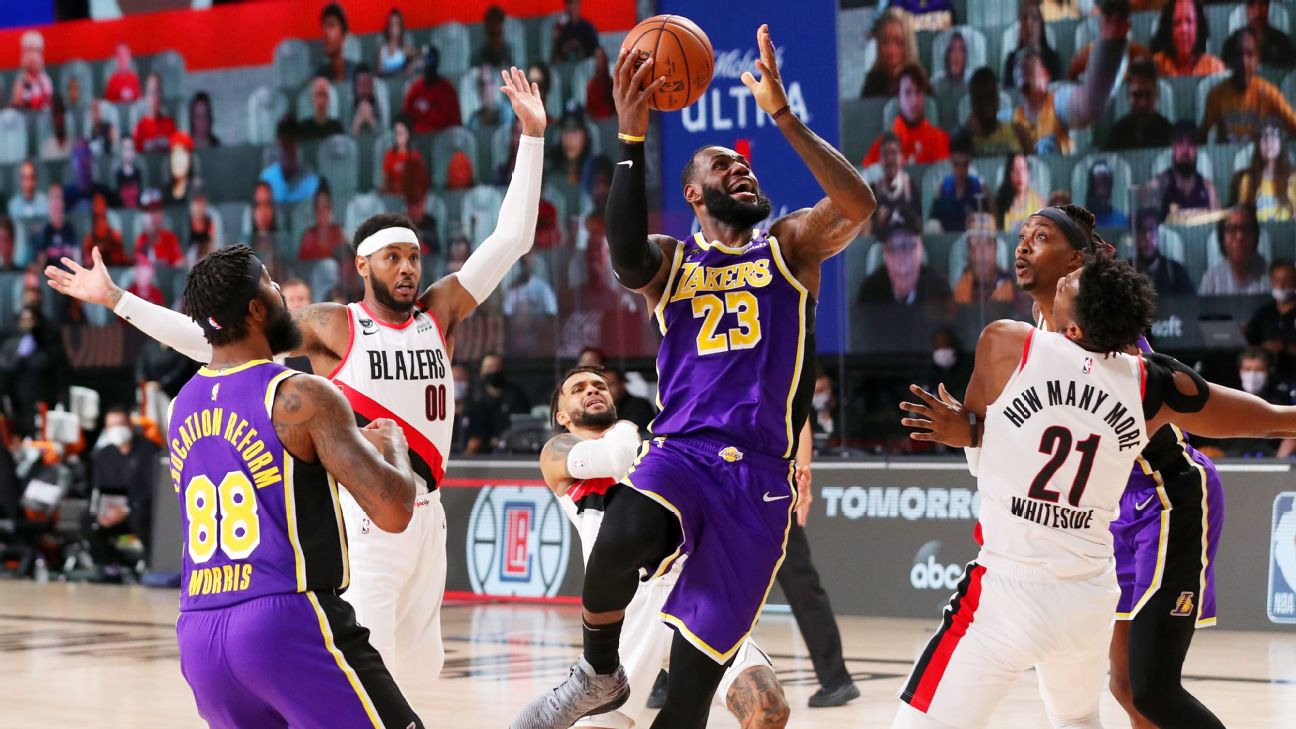 At halftime of Saturday's 116-108 playoff loss to the Los Angeles Lakers, the Portland Trail Blazers held a four-point lead. But when it came to free throw attempts, the Trail Blazers were actually in a steep hole against the top-seeded team in the Western Conference, trailing the Lakers 31-8.

"As far as the free throw differential, particularly at halftime, I don't know if I've ever been in a game where it was that big," Portland coach Terry Stotts said after the loss, which put his eighth-seeded squad down 2-1 in the first-round series, with Game 4 slated for Monday."And certainly it had an impact on the first half, when I think the differential was 23. That had an impact on the game."

Ultimately, the Lakers shot 28-of-43 from the free throw line, and Portland shot 18-of-19. The Lakers won despite missing 15 free throws, the most misses by any team in a playoff win since 2015, according to ESPN Stats & Info.

"The discrepancy in free throws is something that's out of our control," said Trail Blazers star point guard Damian Lillard. "Last game, we came out, [and] they played a really physical game. They played a really aggressive game. That led to a blowout victory for them.

"Tonight, we came in saying we weren't going to get bullied and let them out-physical and out-aggressiveness us, and maybe sometimes we did foul, but they're a physical team as well. When a team is living at the free throw line like they did tonight as a team, it's going to be hard to win a game against a team that's as good as they are."

Lillard played his first game since dislocating his left index finger in Thursday's Game 2 loss. He finished with a team-high 34 points on 8-of-20 shooting, including 5-of-11 from the 3-point line. He tallied seven assists and five rebounds.

"Obviously, I dislocated it, so it's going to have some effect on ballhandling," Lillard said of his finger. "Tonight, the biggest thing I felt was just going up to shoot, when I was gathering the ball, I was uncomfortable. Sometimes I would subconsciously try to ease up on it, so I would lose the ball a little bit. When I was making moves, in the middle of my dribble, I would ease up on it because I would feel the pain, and I would lose the ball a little bit. It kind of stopped me in my tracks. I did as much treatment as I could, and I tried to just ignore it. But once you decide to step out there, it is what it is."


Despite being in a 2-1 series hole, Lillard said he isn't discouraged.

"I've been in worse situations in a series," he said. "We've got to get the next game. We get the next one, and it's a tied series. That's perfectly fine with me."

"Oh, we're good," Anthony said. "I think we're good. It's only 2-1. We have a series. We've got to make some adjustments. Game 4, we know the implications on what that means. ... We're sitting in a good situation. We're not concerned. We know what we have to do.