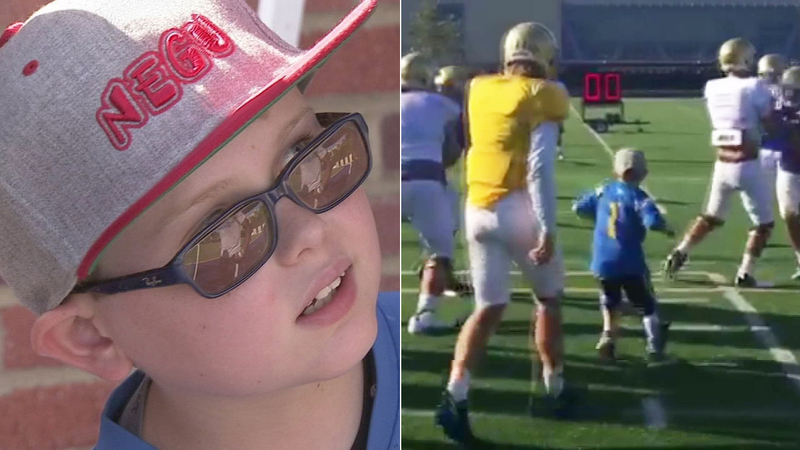 LOS ANGELES (KABC) -- A young football fan who is now legally blind after suffering a stroke and a brain tumor got the thrill of a lifetime from the UCLA Bruins.

Cade Spinello got to practice with the football team on Wednesday. The Bruins' invitation was another positive step in the marathon life-journey for the Spinello family of Orange County.

It started 5 years ago when little Cade was having vision issues. A routine eye exam led to an emergency MRI and surgery on his brain to remove a tumor.

"They did a CT scan and sure enough realized that some time either during surgery or shortly after, he had suffered a massive stroke," said Mike Spinello, Cade's father.

Now, football proves to be a rewarding daily therapy tool for Cade.

"Those moments for Cade, he identifies with them," said Erin Spinello, Cade's mother.

On the practice field, Cade scored a touchdown and was mobbed by the team, who raised him up on their shoulders.

"It just puts things into perspective," said UCLA linebacker Deon Hollins. "That's what it's all about. The fact that we can make that kind of impact, you know, just to anyone, is just really amazing."

If the Bruins beat the Arizona Wildcats this weekend, UCLA will stay undefeated. But Cade's victories are bigger - they're in the world of reading and speech for a 9-year-old who is legally blind.