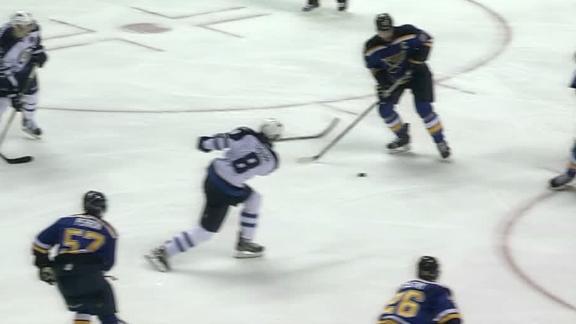 The St. Louis Blues' coaching change was supposed to happen after the season was over, but a disappointing year has cost veteran bench boss Ken Hitchcock his job ahead of time.

The Blues announced Wednesday morning that Hitchcock had been relieved of his duties and that associate coach Mike Yeo was taking over. Yeo, the former Minnesota Wild head coach, was hired last summer with the stipulation that he would take over when Hitchcock retired after this season.

But following the Blues' 5-3 loss at home to Winnipeg on Tuesday night, general manager Doug Armstrong decided the time was now to change things up.

Armstrong was very emotional in announcing the move at a news conference Wednesday.

"We don't lose with pride. It just felt like we were hit and miss night in and night out," Armstrong said. "We need to demand more of ourselves. Our record is not indicative of what we thought. I thought it was going to be a rebuilding year, a re-trenching year. I was excited what we were going to go through. I was excited about going through it with a different mindset to what we've been in the past. We made a lot of hard decisions last summer. The decisions weren't just made with this season in mind but the future of the franchise in mind. But I was excited about that.

"I was excited about moving forward with a group of players. And I don't think we've given our best effort. Ken is paying the price for all our failures, starting with mine. I'm the manager. I'm the president of hockey operations. It's my team."

Hitchcock, who was hired by St. Louis in November 2011, posted a 248-124-41 regular-season record with the Blues and transformed them into yearly contenders, though last season's trip to the Western Conference finals was their deepest playoff run.Hitchcock finishes second all time in wins for St. Louis, and his 781 career regular-season wins ranks fourth in NHL history -- just one victory behind Al Arbour for third place.

The Blues began the season with expectations of being a Cup contender again, but at 24-21-5, they find themselves on the playoff bubble.

What didn't help Hitchcock was the lack of saves he got from his goalie duo of Jake Allen and Carter Hutton who have both struggled greatly. Allen, the No. 1 goalie, recently took a break from the team to reset. Allen has a .895 save percentage while his backup Hutton is at .896, numbers that won't win many games.

"There's one former guy in that room that I think is going into the Hall of Fame and that's Ken Hitchcock," Armstrong said. "Now maybe some of those guys will get there, (but) they've got a long way to go to reach the standard he set."

"I feel terrible that I'm up here, but the one thing I can say is that every day I was there I had Hitch's back and I wanted to win," Yeo said in a news conference. "I wanted to turn it around as assistant coach and that didn't happen. Now I have the task to do it as head coach."

Trouba's accidental goal helps Jets top Blues
Jacob Trouba winds up for the blast but only gets a piece of the puck, which takes a wild deflection off a defender and goes in anyways as part of the Jets' 5-3 win.
Related topics:
sportsespnst louis bluesnhlmike yeoken hitchcock
Copyright © 2021 ESPN Internet Ventures. All rights reserved.
More Videos
From CNN Newsource affiliates
TOP STORIES