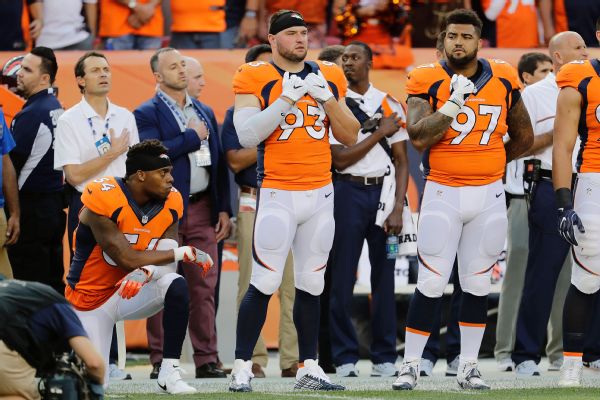 ALAMEDA, Calif. -- Denver Broncos linebacker Brandon Marshall, who has taken a knee during the national anthem in each of the Broncos' first eight games this season, stood for the anthem before Sunday's game against the Oakland Raiders.

Marshall said he will stand for the remainder of the season and explained why in a statement on Instagram Sunday.

In his statement, Marshall referenced O'Shaine Evans, an Oakland man shot and killed by San Francisco Police in 2014.

Reports at the time said Evans pointed an unloaded gun at police outside AT&T Park as police were investigating break-ins to cars outside the stadium during San Francisco Giants games.

Since announcing he would take a knee during the anthem, Marshall has donated money for every tackle he makes to organizations that work with youth.