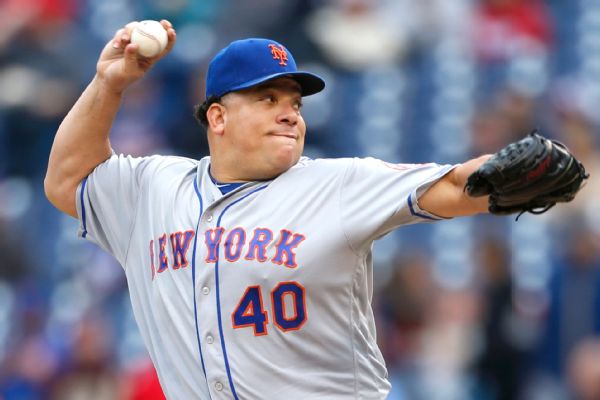 The Atlanta Braves are bulking up their rotation with a pair of 40-somethings.

On the heels of signing 42-year-old knuckleballer R.A. Dickey, the Braves have now reached agreement on a contract with Bartolo Colon, sources confirmed to ESPN. The one-year deal is for $12.5 million, a source told ESPN's Jim Bowden, and the agreement was first reported by MLB.com.

An official announcement is not expected until late next week.

The last major league team to have two pitchers 42 or older start 10 or more games was the 1990Texas Rangers, with Nolan Ryan and Charlie Hough.

Colon went 15-8 with a 3.43 ERA with the New York Mets this past season, and he had the most wins (44) of any Mets pitcher since the beginning of the 2014 season. Wildly popular for his colorful at-bats, Colon also became the oldest player in MLB history to produce his first career home run when he took James Shields deep in San Diego on May 7.

Colon and Dickey will bolster a shaky rotation that didn't produce anyone with double-figure wins this past season but does feature two-time All-Star Julio Teheran and hard-throwing Mike Foltynewicz, who led the team with a 9-5 record.

Atlanta is coming off a last-place finish in the NL East but showed promise down the stretch after acquiring slugger Matt Kemp from the Padres. Kemp teamed with first baseman Freddie Freeman to provide a 1-2 punch in the middle of the batting order.

The Braves went 50-47 after an 18-46 start, including 12 wins in their final 14 games. General manager John Coppolella made it clear he expects to be a playoff contender next season when the team moves from Turner Field to its new $622 million stadium in suburban Cobb County.