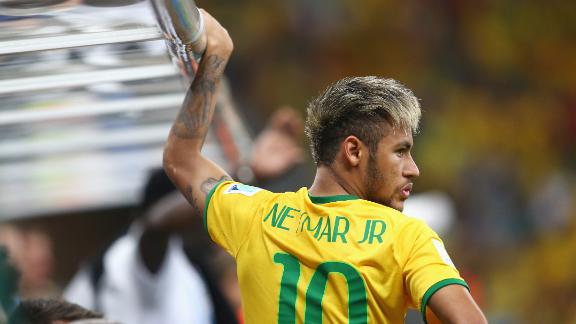 Brazil's star striker Neymar and coach Luiz Felipe Scolari were both satisfied with the team's 4-1 win over Cameroon and say the team is progressing as planned at the World Cup.

"I think the main thing is that the team, as a whole, had our best match," said Neymar. "We managed to attack as we wanted and everyone deserves to be complimented because we played to deserve the score. We are on the right track and are progressing."

The team remains focused on getting better with each game, according to Scolari in his post-game news conference, and know their hardest challenges are still ahead.

"Things evolve step by step and this is what we're trying to plant," said Scolari. "We are progressing on an everyday basis and in every match. Even with some difficulties to score goals, we scored four goals, but could have scored seven or eight. We have improved compared to the match against Mexico."

In addition to Neymar's brace, Fred and Fernandinho scored for Brazil, who played in front of a raucous crowd in their nation's capital of Brasilia.

"We are feeling very comfortable in Brazil," said Scolari. "Brazil has been treating us with such tenderness and is so friendly wherever we go. There is so much motivation from our fans and we feel at home anywhere. Even when we've not been playing well, the support we receive is incredible."

Brazil will face Chile in the round of 16 on June 28 at noon ET in Belo Horizonte. The match will be a massive test for Chile as Brazil have not lost a competitive match in their home country since 1975, going 42-0-18 in their last 60 games.

But Scolari knows Chile, who Brazil beat in the 2010 round of 16, are a good team and will require the best effort from his team to secure a victory.

"We cannot give the opponent a chance. We have to have a very balanced way of playing," said Scolari. "Sometimes it's one goal that is going to decide a goal. We can't make as many mistakes and that's what we have to do differently."

For Neymar, the chance to play in the World Cup's advanced stages is a dream come true.

"I've always aid that there is no pressure when you are making a dream come true," said Neymar. "This is something that you sought after since you were a kid. Today I am playing in matches I always dreamt about. I want to help my fellow players, and doing whatever it takes on the pitch to score."