Chargers-Broncos: Denver earns its 1st win of season with 20-13 victory in Carson 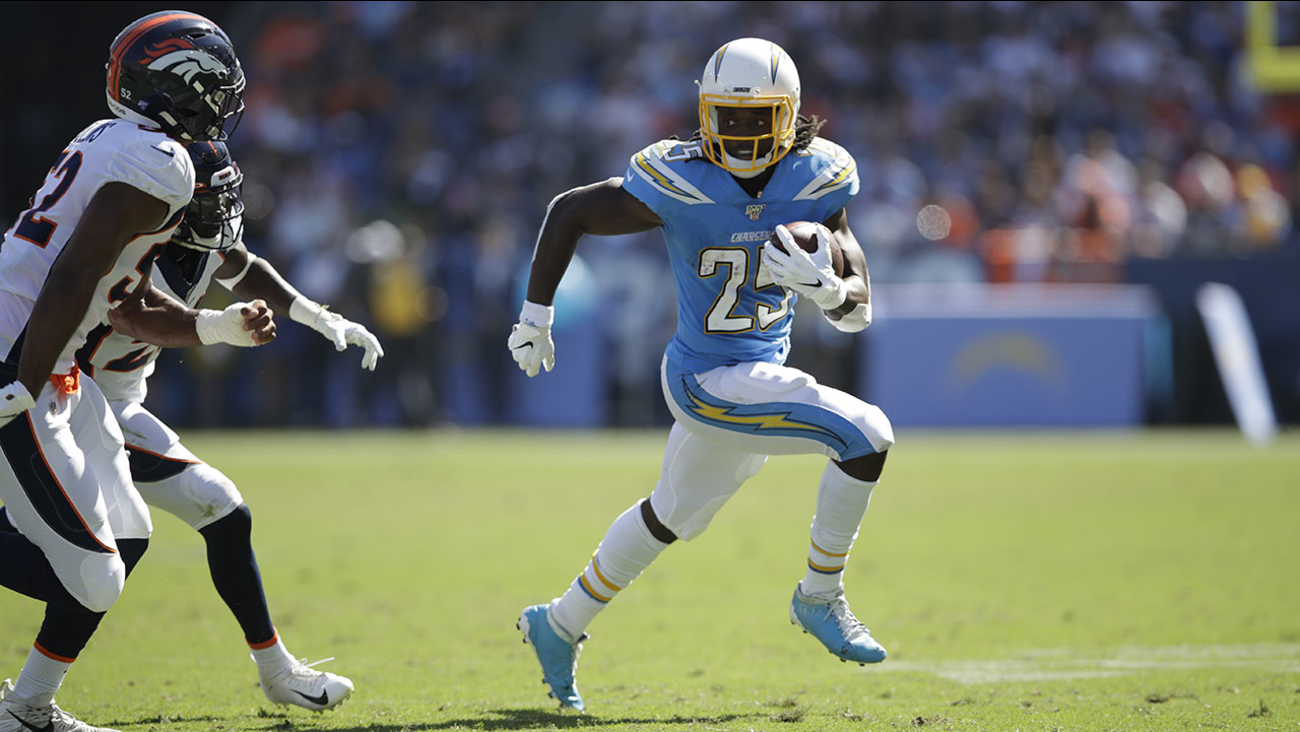 Chargers running back Melvin Gordon returned from his holdout in the game against the Denver Broncos Sunday, Oct. 6, 2019, in Carson, Calif. (AP Photo/Marcio Jose Sanchez)

CARSON, Calif. -- Phillip Lindsay ran for 114 yards, Denver's defense forced three turnovers and the Broncos got their first win under Vic Fangio by defeating the Los Angeles Chargers 20-13 on Sunday.

Joe Flacco completed 14 of 20 passes for 162 yards and a touchdown as Denver (1-4) raced to a 17-0 lead in the second quarter and held on for the 500th victory in franchise history.

Los Angeles (2-3) struggled most of the day and had two turnovers inside the Denver 5. The Chargers got within 17-10 midway through the fourth quarter, but Denver's Brandon McManus put it out of reach with a 46-yard field goal with 1:55 remaining.

Chase McLaughlin's 32-yard field goal brought LA back within a touchdown with 15 seconds remaining, but Denver recovered the onside kick to put it away.

Philip Rivers was 32 of 48 for 211 yards with two interceptions. Melvin Gordon was held to 31 yards rushing in his first game back after a holdout. Fellow running back Austin Ekeler had 15 receptions for 86 yards.

The Broncos dominated from the start and scored touchdowns on their first two drives for the first time in 17 games. Lindsay's 4-yard run up the middle marked the first time Denver scored on its opening drive this season. The Broncos didn't have a play over 20 yards on the first drive over the first four games. But Flacco had a 26-yard strike to tight end Jeff Heuerman and Lindsay had a 21-yard gain off left guard to put the Broncos deep in Chargers territory two plays into the game.

After a Chargers punt, Denver took a two-TD lead when Courtland Sutton went 70 yards up the left sideline. Sutton caught the ball at the Chargers 45, slipped out of an attempted tackle by Rayshawn Jenkins and then eluded a diving Roderic Teemer for this third touchdown in the past two games.

McManus added a 40-yard field goal to give Denver a 17-0 halftime lead.

Los Angeles had two chances to score in the first half, but came up empty both times. New kicker McLaughlin's 48-yard field goal was partially blocked midway through the second quarter. Ekeler then was stopped at the Broncos 1 by Kareem Jackson and fumbled as he tried to reach the goal line. It is the first time since 2012 the Chargers have been shut out in the first half at home.

The Chargers' red zone woes continued in the third quarter. Kyzir White's interception of Flacco gave them the ball at the Denver 7, but Rivers tried to throw it into double coverage and was picked off by Alexander Johnson in the end zone on third-and-goal from the 2.

The Chargers finally get on the board with 31 seconds remaining in the third quarter when Desmond King returned a punt 68 yards. It is the second punt return TD in his career, the eighth player in franchise history with multiple scores.

Gordon had 38 scrimmage yards in his first game back after a 64-day holdout due to a contract dispute. The Chargers got him involved quickly with a 4-yard screen pass on their first play. Gordon reported back on Sept. 26 and was activated prior to last week's game at Miami but did not play.

The Chargers came into the game averaging 103.5 rushing yards but were held to 35. The Broncos allowed 225 yards to Jacksonville's Leonard Fournette a week ago and had the third-worst run defense.