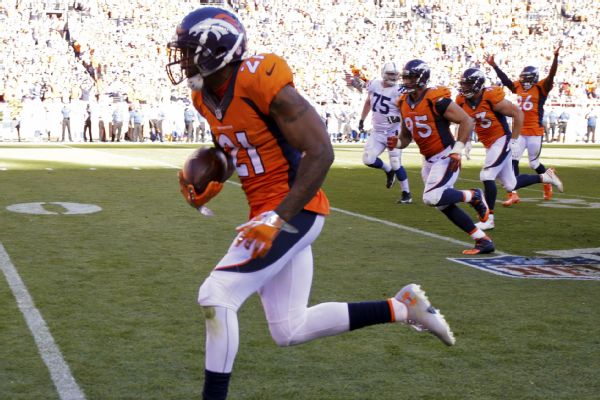 ENGLEWOOD, Colo. --Denver Broncos cornerback Aqib Talib, who did not play in Sunday's win over the San Diego Chargers, was in California Thursday for an evaluation on a back injury that has limited him the last two weeks.

Talib has not practiced fully since the Broncos' Oct. 24 win over the Houston Texans.

"We sent him to California to get a second opinion,'' Broncos coach Gary Kubiak said after Thursday's practice. " ... He will be evaluated when he gets back [Thursday night] and see where we're at [Friday]. It's a day-to-day situation, and we just thought it would be best to get another opinion on it.''

Talib did practice last Friday on a limited basis, and Kubiak had expressed some optimism that Talib might improve enough to play against the Chargers. However, Talib returned to the Broncos' complex Saturday with the same stiffness and soreness in his back -- Kubiak said Talib had a "couple rough days'' last week -- and the Broncos then made the decision to hold him out of the 27-19 victory.

Talib's replacement, Bradley Roby, returned an interception 49 yards for a touchdown in the win.

Talib had not practiced this week, so the Broncos agreed a trip for a second opinion would be beneficial. Talib had an exam Thursday morning and was on his way back to Denver by the time the Broncos were on the practice field Thursday afternoon.

"Actually, I got good vibes ... from the visit,'' Kubiak said. "I know there's some people that have got to together and talk this through.''

Kubiak has not ruled Talib out for Sunday night's game in Oakland against the 6-2 Raiders, but Talib would have to improve significantly over the next three days to be in uniform Sunday night.

On the injury, Kubiak added: "There's good days and bad days, you know what I mean?'' Kubiak said. "So he feels really good, here we go, and then it bothers him again stiffens up on him. We're battling through it.''