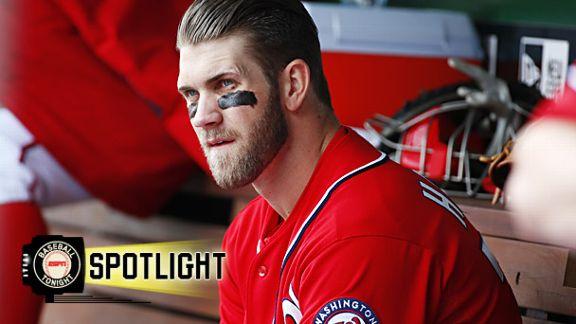 WASHINGTON -- Bryce Harper started Sunday in the Nationals' 3-2 win, one day after he was replaced in the sixth inning for lack of hustle.

Harper batted second and went 1 for 4 with a walk and stolen base against the Cardinals.

"I sat with him for a couple of minutes in his locker and told him I'm confident in him and I'm proud of him and he was going to have impact today, which he did," Williams said.

Harper had a somewhat different take on the conversation with Williams, as far as length goes.

In the sixth inning on Saturday, Harper hit a comebacker to the mound and was easily thrown out at first base. The two-time All-Star was replaced in left field by Kevin Frandsen the following inning.

On Saturday, Harper said after the game: "I respect what he did. That's part of the game."

In the ninth inning with Washington trailing 4-2, Frandsen drove in a run on a groundout, but the inning ended one batter later.

The program from Saturday night's Nationals home game featured a photo of Harper with the slogan "Nothing but Hustle."

"Yes, that is the cover of the Inside Pitch magazine, the game program handed out at home games," a Nationals spokesman told ESPN's Darren Rovell. " 'The "Nothing but ...' slogan is part of our season-long advertising campaign that plays off 'Nothing but Natitude.' Many of the players have been assigned a specific word as part of the campaign. For example, Jordan Zimmermann's is 'Nothing but command.' I believe Ryan Zimmerman is 'Nothing but clutch.' Harper's word, obviously, was hustle."

The manager's decision and postgame comments also served as a reminder to others in the clubhouse about their on-field conduct.

In his third season, Harper is batting .295 with one home run in 16 games this season. He previously missed Wednesday's game in Miami because of tightness in his quadriceps.

Harper Pulled From Nats' Loss
Baseball Tonight Spotlight: Bryce Harper was pulled from the game after the sixth inning for not hustling in the Nationals' 4-3 loss to the Cardinals. Was this the right move by manager Matt Williams?
Related topics:
sportsespnbenchingnatshustlelineupmlbbryce harperwashington nationals
Copyright © 2020 ESPN Internet Ventures. All rights reserved.
More Videos
From CNN Newsource affiliates
TOP STORIES