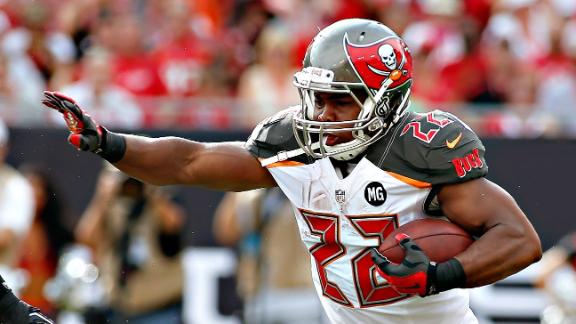 While wide receiver Vincent Jackson's name has been the focus of trade speculation, the player the Tampa Bay Buccaneers are more likely to deal is running back Doug Martin, according to sources.

Teams have already approached Tampa Bay about Martin, and some around the league believe that the Buccaneers would be willing to deal him for the right price before Tuesday's 4 p.m. ET trade deadline, according to sources.

But it's a tough trade to cobble together.

The 25-year-old Martin is a former first-round pick and Tampa Bay still could use his services this season, then attempt to deal him for similar compensation after it is completed.

One reason Martin is considered expendable is that, starting next week, rookie third-round pick Charles Sims is eligible to come off the injured-reserved designated-to-return list.

Martin is averaging just 2.9 yards per carry this season, rushing for 166 yards and a touchdown on 58 carries after carrying the ball 10 times for 27 yards in the Buccaneers' 19-13 overtime loss to the Vikings. He rushed for1,454 and 11 touchdowns in his rookie season in 2012 but was limited to just six games last season due to injuries when he rushed for456 yards and a touchdown.