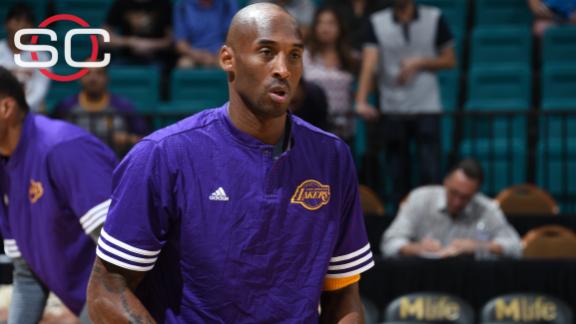 LAS VEGAS -- Los Angeles Lakers star Kobe Bryant left Tuesday's 107-100 preseason loss to the Sacramento Kingsafter suffering a lower leg contusion in the third quarter. He did not return to the game.

The 37-year-old, who has suffered a season-ending injury in three consecutive seasons, sustained the bruise when he was kneed in the left calf, according to the Lakers, on a drive to the rim with 9:19 left in the third quarter at the MGM Grand Garden Arena.

Bryant, who ran into Kings center Kosta Koufoson the play,checked out of the game and was tended to by the Lakers' medical staff. He then left the floor unassisted and walked briskly through the tunnel to the locker room.

He left the arena after the game for personal reasons and did not speak to the media, the Lakers said. Sources told ESPN's Ramona Shelburne that Bryant visited former teammate Lamar Odom at Sunrise Hospital and Medical Center in Las Vegas after the ex-Laker was found unconscious at a Nevada brothel. The Los Angeles Daily News reported that Lakers general manager Mitch Kupchak visited the hospital as well.

"You guys know him. He's about as tough as they come," Scott said. "So I think he'll be fine for Saturday.

"When [Lakers trainer Gary Vitti] left and went to see him in the locker room, obviously there was concern," Scott said. "So when he came back, the first question was, 'Is he OK?' I saw it on the replay. It looked like he kind of got kneed in the calf or the knee. Obviously, [we were] concerned."

Bryant, who is entering his 20th season with the team, returned to action this preseason after being out for nine months to rehab a torn rotator cuff in his right shoulder, which ended his 2014-15 season after 35 games.

The Lakers are scheduled to resume practice Thursday.