Can Anthony Davis and the Lakers get LeBron to play elite defense again? 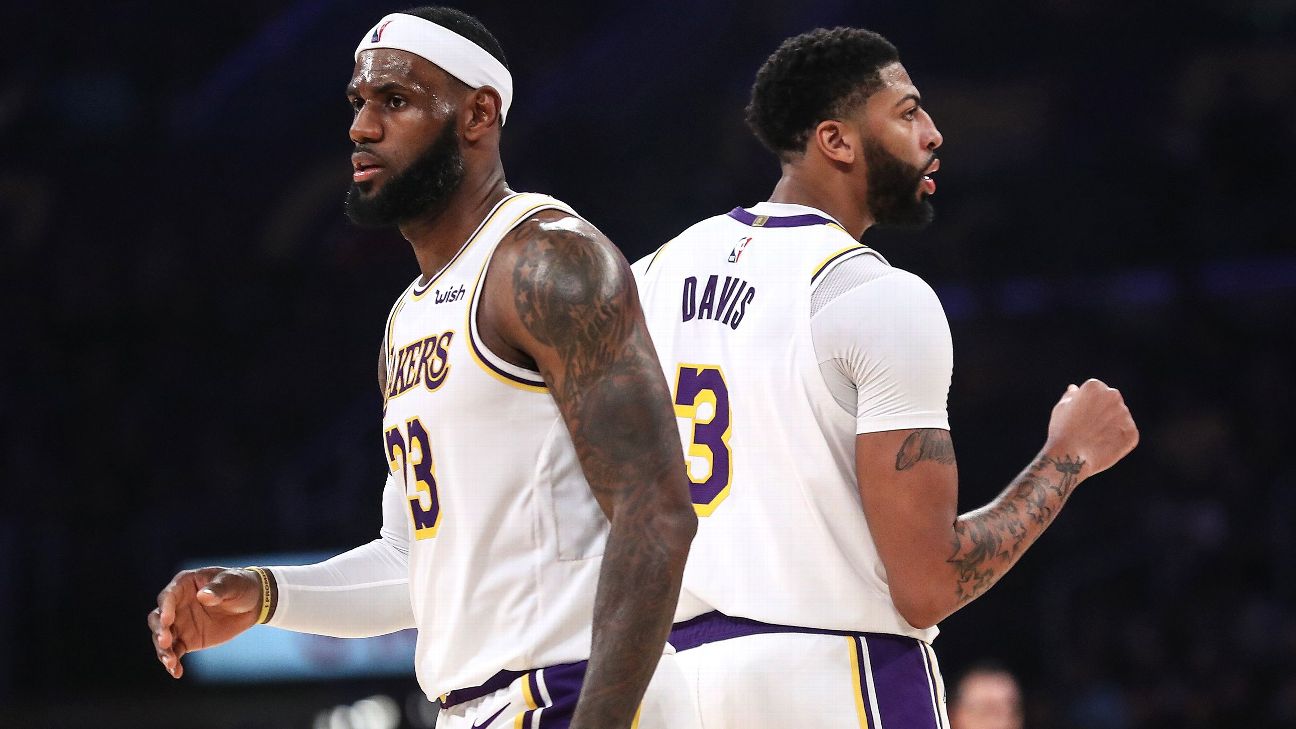 Los Angeles Lakers coach Frank Vogel made a lot of strong decisions during his tenure as coach of the Indiana Pacers, but there was one mistake that's been hard to forget.

In Game 1 of the 2013 Eastern Conference finals, Vogel took his defensive center, Roy Hibbert, off the floor for the final play of overtime against the Miami Heat. He conceded to the danger of small-ball center Chris Bosh getting open for a jumper and was afraid switching would result in a bad match up elsewhere.

LeBron James crushed the strategy, zipping past Paul George for an uncontested layup at the buzzer with one of the best basket defenders of this era on the bench. The Heat won by one point and ended up taking the pivotal series in seven games.

At his core, Vogel believes in the power of having a great defensive center. He pushes back against the contemporary notion that centers have lost their value and the game has moved past having a somewhat stationary basket defender patrolling the front of the rim.

With James now on his team, Vogel sees a way to turn back the clock. But he needs some greatness from James to get it done. Specifically, for the Lakers to accomplish their goals and follow their plans, they need a great defensive season from No. 23.

"The league's modern-day offenses are designed to invert your defense. To get switches and 7-footers guarding point guards and point guards guarding bigs down low," Vogel said. "We want to resist that temptation. There are still times when you have to do it, but we want to do it as little as possible."

The Lakers' roster features the personnel to make this vision work. Vogel has two classic centers who are good at defending the rim and gifted at blocking shots in JaVale McGee and Dwight Howard. And they have a defensive wizard in Anthony Davis who can do it as well. In theory, the Lakers could have one of the best rim-defending teams in the league.

Right from the start of the preseason, Vogel had his guards playing old-school basketball and getting up in players' faces on the perimeter. Avery Bradley was running a clinic in this regard. It also plays toward the strength of players like Danny Green, Rajon Rondo and Kentavious Caldwell-Pope. The idea is to deny jump shots and encourage drives right into the big guys prowling in the paint, known as "funneling" the offense into the best defenders.

This was the basis of how Vogel built one of the league's best defenses around Hibbert in Indiana, when the big man changed the game by learning to master the "rule of verticality" that enabled him to defend and make contact with drivers without fouling.

Hibbert and other centers like him are out of the league now. Teams are playing smaller and quicker big men because they're so worried about screens freeing up great shooters. But the Lakers plan to do a lot of dropping their centers back and fighting over screens instead.

This system requires the forwards to work very hard on defense. They have to commit to helping the center and also getting out to the shooters that nearly every team has spacing the floor. It's an energy-zapping exercise that requires discipline because the opposition will surely test it.

"I'm born to have workload, it's who I am," James said. "Defensively is where we set our mark, and everything else falls into place."

Starting in the 2008-09 season, not coincidentally the year he won his first MVP, James made all-defensive first team five consecutive seasons. During his Heat years from 2010-14 he was demonic on that end, prowling for steals and putting on a nightly clinic in help-and-recover.

Those Heat teams often would trap on screens, triggering turnovers that led to their vicious fast breaks that would flip games from tight to blowouts in a handful of minutes. Coach Erik Spoelstra would signal in the play by clasping his hands together, appropriately as if he were wrapping them around the opposition's neck.

But it just took so much energy that it was hard to keep it up. By the 2013-14 season, James' last in Miami, he was slipping on defense. He made the all-defensive team that year, but only the second team and some of it was on reputation. When he got to Cleveland the next season and there was no such defensive system in place, it was almost like James started going on regular season defensive vacations.

That's not to say he couldn't summon defense when needed, probably the greatest play of his career came on defense in Game 7 of the 2016 Finals when he chased down Andre Iguodala with an historic blocked shot. But there's a reason he hasn't been on the all-defensive team since he left South Florida.

Over the past couple seasons, James' defensive performance has weakened. He's been slower on closeouts or, at times, doesn't even bother. He's gotten lethargic on rotations and sometimes abandons the weak side.

Two years ago in Cleveland his defensive real plus-minus ranked 44th among small forwards. But that season he was playing 82 games and conserving energy for a playoff run, where he was outstanding. Last season with the Lakers, he was part of an overall middling defensive group, although he was slowed by a groin injury.

If Vogel sticks with the system he wants to play, that isn't going to work this season. And it's already one of the things James and his high-profile new teammate are trying to address.

At the start of the season, Davis issued a challenge to James: Get back on the all-defensive team. It's a coded challenge, because whether James makes it or not, Davis wants to set a standard that he doesn't want the recent years' version of James going through the motions on defense for much of the regular season.

"We're able to take constructive criticism from each other," James said. "I can get in his ear and he can get in my ear, but it's all to make each other better and challenge each other, which will ultimately be better for the team.

"We're able to be straightforward with one another and not sugarcoat anything and not take anything personal."

In their discussions over meals, on private jets and in makeup chairs while filming "Space Jam 2" this summer, James and Davis formulated a strategy for this season. They worked out together, practicing positioning on what could end up being one of the more devastating pick-and-roll combos the league has ever seen. But the talking was perhaps most important.

A central theme that came out of these taco summits, sources said, is to set a tone for the entire organization to maintain poise when the expected firestorm comes. This is for the locker room, the media and social media.

This goes both ways. It was James who got loose during his first season back in Cleveland in 2014-15, putting out passive-aggressive tweets and occasionally talking in code that undercut teammates and coaches. It was Davis who last year handled his trade demand sloppily, getting fined by the NBA, and then going out the door with a less-than-tasteful "That's All Folks" message (good promotion for a Looney Tunes movie though).

The idea is that James and Davis will hold each other accountable toward the off-the-court machinations that threaten every newly formed star duo. But a big part of that accountability comes back to defense. While Vogel plays a central role in motivating James and putting him in a position to be successful, when it comes down to it, James will have more built-in respect for Davis than probably anyone else on the roster.

That means that if Davis can scramble on defense to get in and back McGee and then blitz out to challenge a shot then the same can be expected from James. "Hopefully the two of them can help each other reduce the workload," Vogel said of his two big stars. "What we're trying to get is dominant defense and selfless offense."

The offensive part, when James and Davis are two of the most efficient players in league history, promises to not only be easier but also be one of the reasons to watch the NBA this season.

The defense, though, is maybe where a lot of the real attention should be focused. 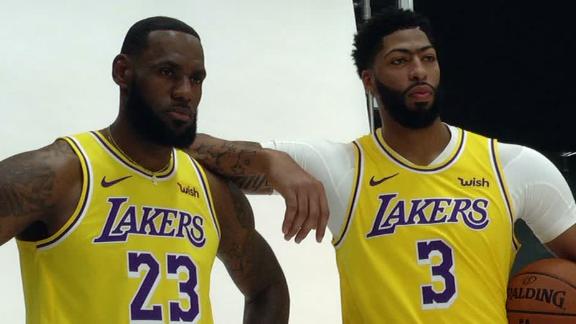 LeBron, AD, Lakers early favorite to win title
Doug Kezirian takes us through the betting boards for the NBA's top teams according to Caesars Sportsbook, including this year's favorite, the Lakers, at 3-1 odds. 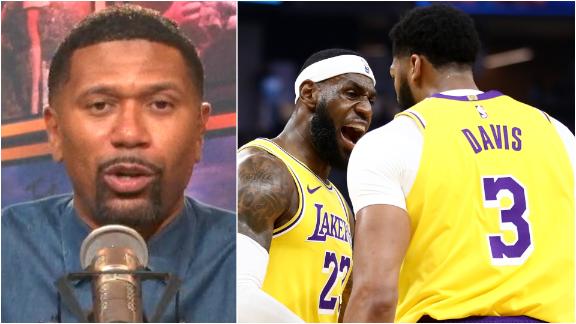 Lakers are Rose's favorite to win title
Jalen Rose sees the Lakers' height being a problem for teams around the league. He goes on to say he would pick the Lakers right now to win the championship.
Report a correction or typo
Related topics:
sportsespnanthony davisnbalos angeles lakerslebron james
Copyright © 2020 ESPN Internet Ventures. All rights reserved.
More Videos
From CNN Newsource affiliates
TOP STORIES