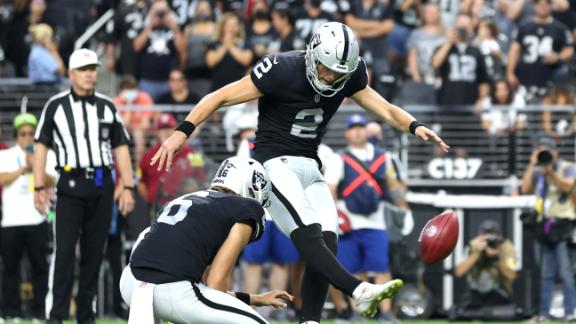 Coach Jon Gruden isn't about to nitpick about how they're winning.


Reigning AFC Special Teams Player of the Week Daniel Carlson's 22-yard field goal as time expired in overtime lifted the Raiders to a 31-28 victory over the Miami Dolphins on Sunday. It marked the second time in the Raiders' first three games - both at home - they overcame a two-touchdown deficit to win in overtime. They also did so against Baltimore in Week 1 on a Monday night.

"I don't apologize for winning these games, no matter how we won them," Gruden said. "When you're down 14-0 and score 25 unanswered in the NFL against a team like that, something's going right."

Raiders quarterback Derek Carr found Bryan Edwards for 34 yards before Peyton Barber put together runs of 27 and 8 yards to put Las Vegas on the Miami 11-yard line. That eventually set up the winning score for Carlson, who missed an extra point in regulation and kicked two field goals in the extra frame.

Las Vegas is the first team to open 3-0 against teams that all won 10 or more games the previous season.

Carr, who completed 26 of 43 pass attempts for 386 yards and two touchdowns, used his talented receiving depth for the third straight game. The eight-year veteran completed passes to nine targets, led by Hunter Renfrow and Darren Waller, who each had five receptions. Renfrow also scored a touchdown.

With star running back Josh Jacobs sidelined with an ankle injury, recently signed Barber led the rushing game with 111 yards and a touchdown on 23 carries.

"I think he did more than just run it - we went to him as our third-down back ... he caught a pass out of the backfield, he picked up some blitzes, he was helpful in protection, he didn't blow any assignments, he ran hard," Gruden said. "I don't even hardly know this guy. But I gave him a big hug and a game ball."

And while the Raiders' offense outgained Miami 497-330, it was their special teams and defense that ignited the comeback after Miami scored the game's first 14 points.

One play after Zay Jones raced downfield on a punt to down the ball on the 1-yard line, cornerback Casey Hayward Jr. caught Miami receiver Jaylen Waddle on a screen pass in the end zone for a safety.


"That one little moment of Zay just giving an extra effort, an extra burst, to go pin that ball, I mean that allows us to get two points and get us back going," Carr said. "He made a huge play for us on the special teams in that moment."

Carlson booted a 50-yard field goal to get the Raiders within nine. Then, after a defensive stop, Las Vegas drove 95 yards to cut Miami's lead to 14-12. Fullback Alec Ingold was rewarded by having his number called after recovering Barber's fumble on the goal line on the previous play.

The Raiders scored on their next two possessions when Carr and Renfrow connected for a 12-yard strike and Barber dived over the pack for a 1-yard touchdown to open a 25-14 lead.

The Dolphins weren't done, though.

After Miami's Jason Sanders made it a one-score game with a 46-yard field goal midway through the fourth quarter, Jacoby Brissett scrambled on fourth-and-goal for a 1-yard touchdown with :02 left in regulation. Brissett passed to William Fuller for the 2-point conversion, forcing overtime.

The teams exchanged field goals in overtime before Carlson's winner. The Dolphins elected to kick a field goal on fourth-and-2 from the Las Vegas 32. That tied the game with 2:49 remaining, but Miami never got the ball back.

Brissett, playing in place of injured Tua Tagovailoa, finished 32 of 49 for 215 yards. Waddle led Miami with 12 receptions for 58 yards, while Mike Gesicki hauled in 10 passes for a team-high 86 yards.

"There was definitely a little bit of a lull there in the second and third quarter," Miami coach Brian Flores said. "We just couldn't get much going offensively. (Brissett) got a lot more comfortable as the game went on, stepping up in the pocket and making some big throws in the end. Ultimately, it wasn't enough. We've got to play better across the board."

When linebacker Elandon Roberts darted 85 yards for a pick-six touchdown, it extended an NFL-best streak of 25 games with a takeaway for the Dolphins.

Raiders: travel to Los Angeles to face the Chargers on Oct. 4.