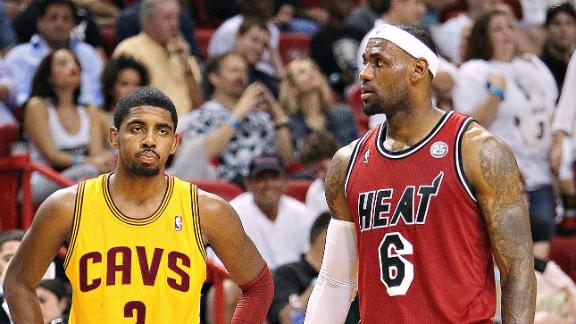 This story has been corrected. Read below.

The Cleveland Cavaliers found out they were getting LeBron James back the same way the rest of the world did, when they read James' essay that was posted on Sports Illustrated's website Friday afternoon, sources said.

James spoke with Heat president Pat Riley and owner Micky Arison on Friday morning on the phone before James' first-person essay was posted, sources said. ESPN.com reported incorrectly earlier that the Heat did not know of the decision until it was posted and were not expecting it. The Heat had left their meeting with James earlier this week in Las Vegas feeling good about their chances to retain him, even if it was on a short-term deal.

No contract for James has been negotiated with the Cavs yet because no talks had taken place before the essay was released. The Cavs are expected to offer a four-year deal worth the maximum $88 million.

James is expected to make a long-term commitment to the franchise, sources said.

James, his agent and advisers deeply considered how they wanted to release the message and decided they didn't want to make it about the Cavs or the Heat, but about the people of Ohio. James wanted to tell them first, sources said.

He also wanted to communicate that he accepts the pressure and the challenges that come along with this choice and any fallout that may come with it. Wanting to make it personal, James wanted the words to be straight from him.

Several of James' friends and family cried when they read the piece before it was finalized, sources said. Though he and his family enjoyed living in Miami, they felt a strong pull to return home to live year-round.

A July 11 story on ESPN.com incorrectly reported when the Miami Heat learned about LeBron James' plans to sign with the Cleveland Cavaliers. James told the Heat before posting a story on SI.com.

LeBron Enough To Make Cavs Contender?
P.J. Carlesimo doesn't think the Cavaliers' roster, including the addition of LeBron James, is enough to make the team a serious contender next season.

Expectations For Cavaliers
Jeff Van Gundy discusses whether the Cavaliers are title contenders with the addition of LeBron James.

Cleveland Reacts To The Return Of King James
Fans in Cleveland react to the news that LeBron James is returning to the Cavaliers.

What's Next For The Cavaliers
Brian Windhorst discusses Cleveland's interest in acquiring Kevin Love and the other players they may go after.