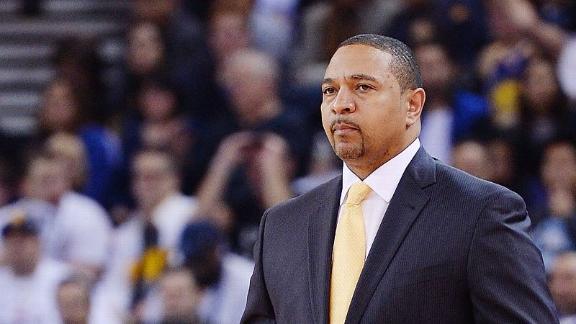 The Cleveland Cavaliers have reached out to Mark Jackson about their head-coaching job, according to sources with knowledge of the team's thinking.

Cavs general manager David Griffin telephoned Jackson several days ago and the two spoke, but no formal interview has been scheduled and it is unclear how serious the Cavs' interest in Jackson is, sources said.

The Cavaliers also plan to interview former Maccabi Tel Aviv coach David Blatt next week, The Associated Press reported. Blatt, who has known Griffin for years, announced Thursday that he's leaving the European champion to pursue an unspecified job in the NBA. Blatt, 55, has drawn interest as an assistant coach for the Knicks, Warriors and Timberwolves as well.

The Cavaliers have cast a wide net in looking for a replacement for the recently fired Mike Brown. ESPN.com reported that they offered Kentucky coach John Calipari a 10-year contract worth nearly $80 million to become the club's president and coach. Calipari signed a new seven-year contract with Kentucky last week.

Gentry and Lue will meet with the Cavs for a second time on Friday, according to multiple reports. They are believed to be front-runners, according to one source.

If the Cavs' interest in Jackson progresses, he would become their highest-profile candidate. Jackson, who was fired somewhat controversially by Golden State last month, led the Warriors to back-to-back playoff appearances for the first time in 22 years.

Jackson won 51 games last season and 47 the season before, compiling a 121-109 record in three seasons in Golden State. He is working for ESPN as an analyst during the NBA Finals.

Jackson declined to comment when asked about the Cavaliers.