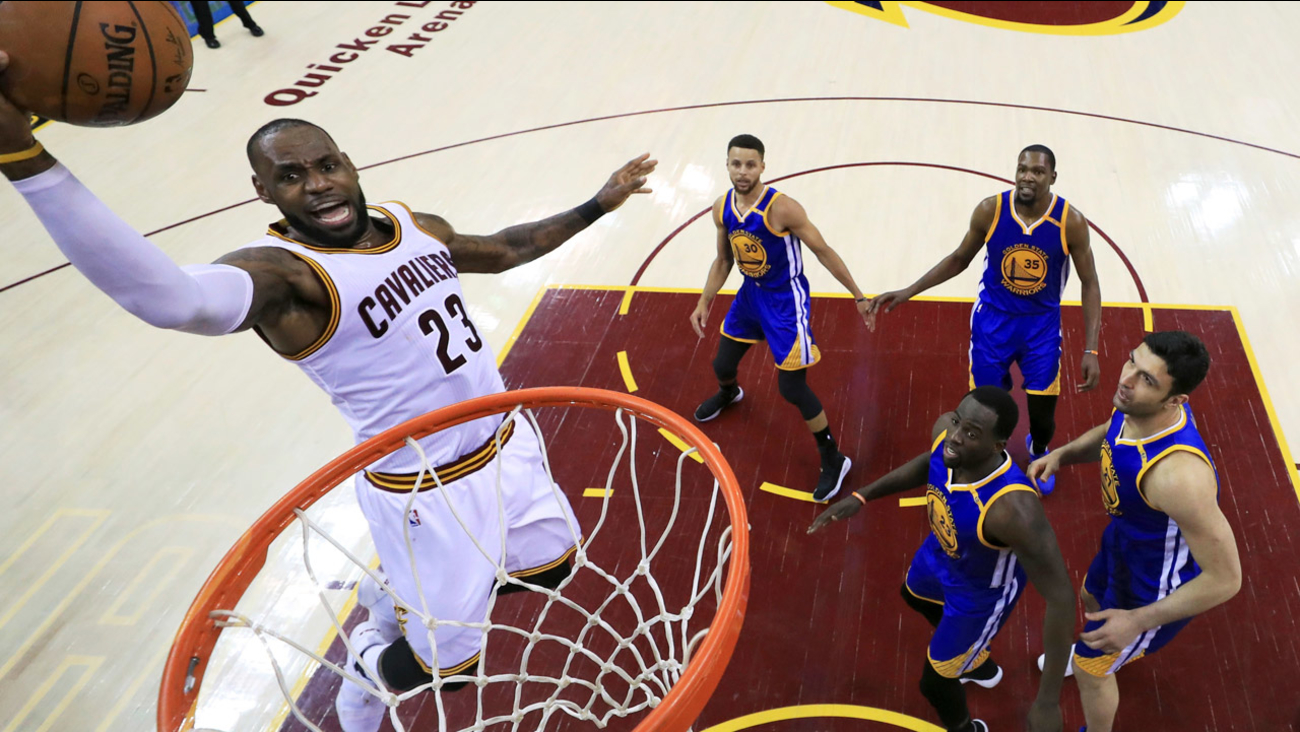 Cleveland Cavaliers forward LeBron James drives to the basket against the Golden State Warriors during the first half of Game 3 of basketball's NBA Finals in Cleveland. (Ronald Martinez/Pool Photo via AP)

CLEVELAND -- The Cavaliers stopped Golden State from celebrating and maybe started another comeback.

Just like last year, the NBA Finals are at 3-1 after four games.

LeBron James recorded a triple-double, Kyrie Irving scored 40 points and Cleveland outperformed the NBA's most electrifying offense in a testy Game 4 filled with technical fouls on Friday night, beating the Warriors 137-116 and ending their perfect postseason.

A series that appeared to be headed for a quick conclusion is California bound for Game 5 on Monday night.

The Cavs set scoring records in the first half and then held on during a wild third and fourth quarter that included technical fouls, James jawing with fellow superstar Kevin Durant and Cleveland's crowd roaring like a jet engine.

No team has ever come back from a 3-0 deficit in the NBA playoffs.

But until the Cavs did it last year, no team had ever rallied from a 3-1 deficit to win the Finals. Cleveland took Game 3 at home, lost Game 4 and then won the final three games - Game 7 in Oakland - to capture the city's first sports championship since 1964.

As the final seconds ticked off, Cleveland fans chanted "Cavs in 7."

The Warriors won their first 15 playoff games, the longest postseason streak in North American sport history, but 48 minutes from a party they've been planning for a year has been put on hold.

Durant, still one win from the coveted championship he left Oklahoma City to get, scored 35 but got little help from Stephen Curry, who scored 14 on 4-of-13 shooting.

James finished with 31 points, 10 rebounds and 11 assists for his ninth career triple-double in the Finals, breaking the record of eight held by Magic Johnson.

Kevin Love added 23 points for Cleveland, which made 24 3-pointers and finished the first half with a jaw-dropping 86 points.
Report a correction or typo
Related topics:
sportsohiogolden state warriorscleveland cavaliers
Copyright © 2021 by The Associated Press. All Rights Reserved.
More Videos
From CNN Newsource affiliates
TOP STORIES