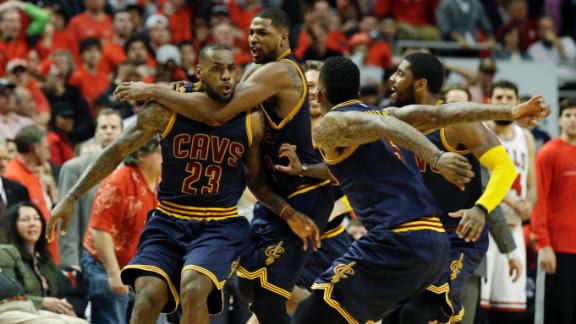 CHICAGO -- Before LeBron James got the chance to win Game 4 of the Eastern Conference semifinals on a buzzer-beating shot against theChicago Bulls, twice in the last 10 seconds of the game, Cleveland Cavaliers coach David Blatt's actions nearly prevented that scenario.

The first occurred with 9.4 seconds left in the fourth quarter after Chicago's Derrick Rose tied the game at 84. Blatt took four steps onto the court as the Cavs prepared to put the ball in bounds under the basket, and he put his hands together to signal for a timeout. Cleveland associate head coach Tyronn Lue quickly pulled Blatt back toward the baseline to keep the coach from drawing any referee's attention with his timeout request.

Cleveland was out of timeouts by that point, having burned its final two timeouts with 18.8 seconds left when James Jones could not find an open man when trying to inbound the ball at half court. If Blatt had been granted the timeout, the Cavs would have been penalized with a technical foul, resulting in one free throw for the Bulls plus a loss of possession, giving the ball back to the Bulls after the free throw.

"Yeah, I almost blew it, to be honest with you," Blatt said after the Cavs' 86-84 win to knot the series 2-2, acknowledging the intended timeout. "I think we called two or three timeouts there on that sideline out. And good thing they caught it, my guys."

No members of the three-man officiating crew -- Scott Foster, Tom Washington and Jason Phillips -- were particularly close to Blatt on the court when the coach made his initial signal before Lue stopped him.

Mike Bantom, the NBA's executive vice president of referee operations, said in a statement that none of the referees saw Blatt signal for a timeout.

"The referees knew that neither team had a timeout remaining, so their focus was on the court," Bantom said. "None of the three officials saw Coach Blatt signal for a timeout."

Another instance that could have changed the outcome of the game was Blatt originally calling for a play that would have had James passing it in from underneath the hoop with 1.5 seconds remaining rather than taking the last shot.

"To be honest, the play that was drawn up, um, I scratched it," James said after the game. "And I told Coach, 'Just give me the ball. And it's either going to overtime or I'm going to win it for us.' It was that simple.

Cavs backup guard Matthew Dellavedova ended up taking the ball out of bounds. James faked toward the hoop to buy himself a bit of space with Jimmy Butler guarding him and then cut to the corner, where Dellavedova found him for the 21-foot jump shot that went through the net as time expired.

J.R. Smith was asked by a reporter whether there was any doubt James would end up with the final shot regardless of the initial play call.

Blatt was specifically asked after the game whether he drew up the final play to get James open for the shot and did not reveal that James changed the play call.

"Yeah, we wanted him to throw it right in over the shoulder and with that amount of time on the clock, let him take a shot and he did," Blatt said. "Great play."