CFP to carry over procedures into '15 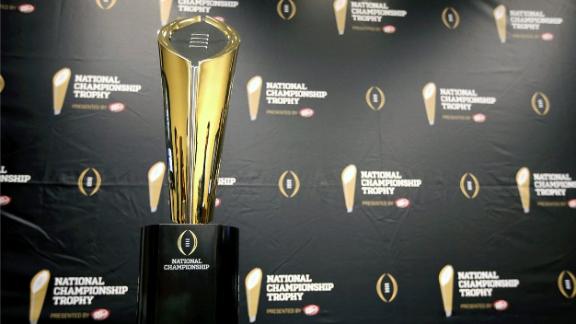 INDIANAPOLIS -- Saying they were pleased with how things worked in the first year, members of the College Football Playoff selection committee will carry over the same procedures -- including the weekly ranking system -- into Year 2.

The committee met Wednesday and Thursday, convening for the first time since it selected the four teams for the inaugural playoff on Dec. 7. Selection committee chairman Jeff Long said members undertook a thorough review of how the process went last year and decided to keep the status quo.

"Generally, we think last year went very well, and we were very pleased with the reaction from fans across the country," said Long, who is the athletic director at Arkansas. "Our goal, really, is to build upon that success."

Perhaps the most controversial part of the last year's process was the unveiling of a weekly Top 25 on Tuesday nights, especially as those rankings changed from week to week. The committee voted to keep the weekly rankings and will issue the first one on Nov. 3. There will be five sets of weekly rankings before the final one on Dec. 6, but that's because there is one fewer Saturday in the 2015 season.

"The important thing is that we're staying consistent and ranking teams after nine weeks of the season," Long said.

Despite some concerns about heavy workloads for committee members, who are tasked with meeting each weekend for more than a month to build rankings, Long said that system also will continue.

"There were discussions about it," he said, "but I think we came out feeling strongly that face-to-face meetings are very important. We think that's a true strength of our rankings system, being in the room all together as committee members to discuss it."

The committee also will examine advanced statistics and data made available to its members, hoping to narrow down the stream of information to the most relevant and worthwhile numbers and making sure everyone involved understands the stats they're using, Long said.

New members Bobby Johnson and Kirby Hocutt attended their first selection committee meetings and were welcomed to the group. However, USC athletic director Pat Haden, who has a gay son, followed through on his boycott of the meetings in light of Indiana's newly passed religious freedom law that could take effect in July.