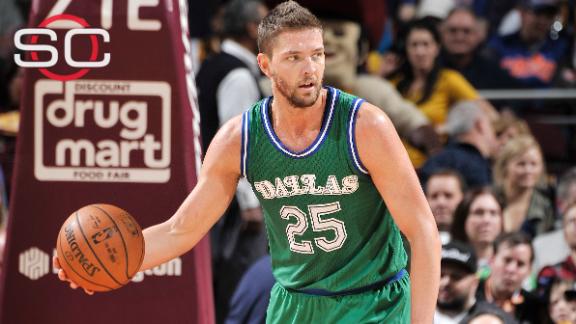 Parsons, who sources say will receive a second opinion before scheduling an operation, is expected to be fully recovered in time to resume his regular offseason basketball-workout routine.

This would be the second consecutive season that Parsons' season ends prematurely because of surgery on his right knee. However, sources said this injury is not nearly as severe as the cartilage damage he suffered last season that was repaired with a hybrid microfracture procedure on May 1.

The Mavs announced a sore right hamstring as the reason that Parsons left Friday's loss to the Golden State Warriors in the third quarter. An MRI on Monday revealed that the pain in Parsons' lower-right hamstring was being caused by the torn meniscus, sources said.

Parsons, who averaged 13.7 points, 4.7 rebounds and 2.8 assists in 61 games this season, endured a difficult rehabilitation process after last year's surgery. He missed the entire preseason and sat out the season opener, then dealt with strict minutes restrictions for the first six weeks of the season, when he was held out of the second games of back-to-backs and struggled to find his rhythm.

But Parsons, 27, has been playing the best basketball of his career since fully recovering from the hybrid microfracture surgery. He has averaged 18.9 points, 5.9 rebounds and 3.2 assists per game in the past two months, shooting 51.9 percent from the floor and 47.7 percent from 3-point range during that span, prompting coach Rick Carlisle to refer to him as a "franchise-caliber player in the making."

The Mavs, who at 35-35 are tied for seventh in the Western Conference and a half-game behind the Trail Blazers entering Wednesday's game in Portland, must continue their push to make the playoffs without Parsons.

Sources described Parsons as distraught Monday because he was so determined to help the Mavs return to the playoffs after being limited to only one game in last season's first-round loss to the Houston Rockets, his former team.

Sources said Parsons is still likely to exercise his right this summer to opt out of the final season of his three-year, $46 million deal. He is expected to receive maximum-contract offers in free agency, with sources considering the Mavs the front-runners to keep him.