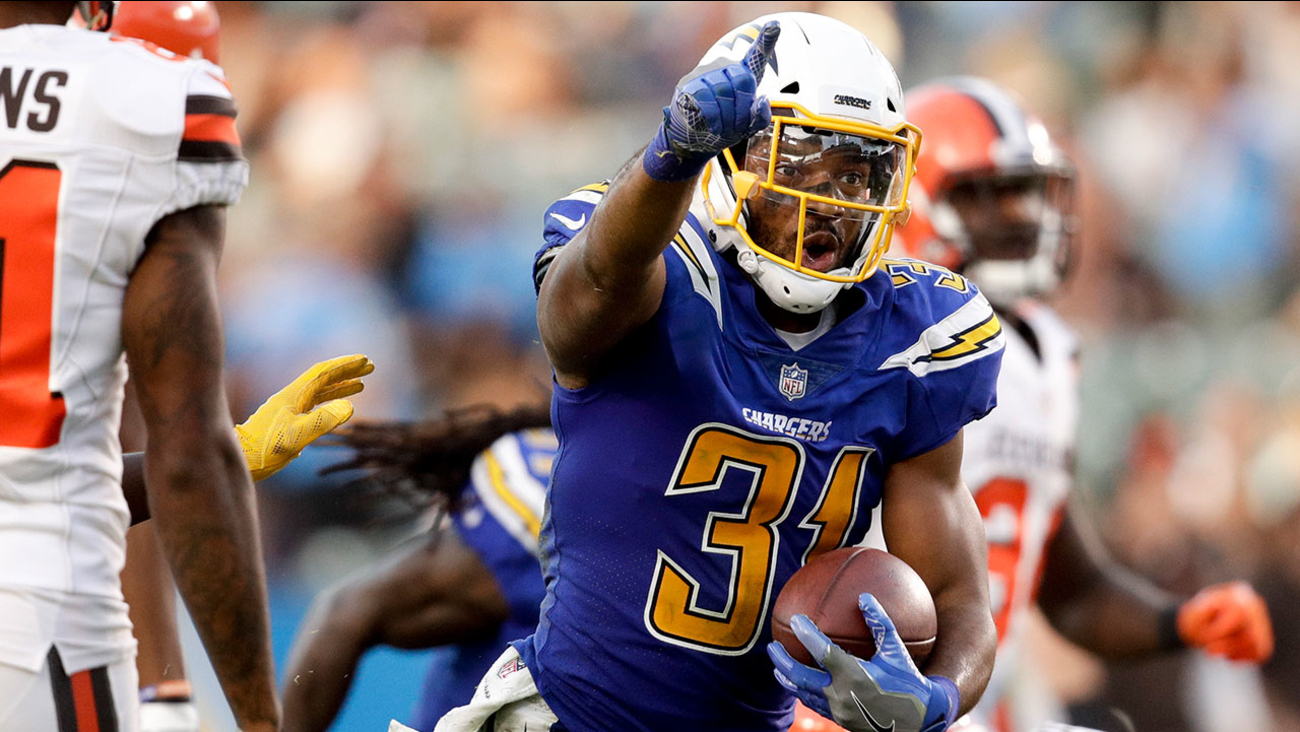 CARSON, Calif. -- Philip Rivers passed for 344 yards and hit Keenan Allen for a touchdown, and the surging Los Angeles Chargers moved into a tie for first place in the AFC West with a 19-10 victory over the winless Cleveland Browns on Sunday.

Allen had 10 catches for 105 yards in his third straight big game for the Chargers (6-6), who have won six of eight to pull even with Oakland and slumping Kansas City atop the division with four games to go.

New kicker Travis Coons hit four field goals as the Chargers grinded out a win over the Browns (0-12), whose only victory in their previous 30 games was a 20-17 win over the then-San Diego Chargers on Christmas Eve last season.

But Joey Bosa forced a fumble with a vicious sack of DeShone Kizer deep in Chargers territory, and Denzel Perryman recovered with 4:48 to play. The Browns had another drive, but Adrian Phillips' interception ended it.

Josh Gordon had four catches for 84 yards in his first NFL game since 2014 for the Browns. The talented receiver had been suspended for over 2 seasons for numerous violations of the NFL's substance abuse policies, but was reinstated last month.

Kizer passed for 215 yards and hit rookie David Njoku for a 28-yard TD for the Browns, who took their 30th loss in 31 games since late in the 2015 season.

They're 1-27 under coach Hue Jackson, who broke John McKay's NFL record for the slowest start to a coaching tenure with a franchise.

Cleveland has four games left to avoid becoming the fifth winless team in NFL history and only the second in a 16-game season.

The Chiefs' loss to the Jets earlier in the day and the Raiders' win over the Giants left the Chargers in position to claim a share of the AFC West lead in Week 13 despite starting 0-4.

Although Los Angeles struggled in the red zone after scoring 82 points in its previous two games, the Chargers did enough.

The Browns' offense didn't get rolling until late in the first half, with Gordon making a big third-down catch before Njoku leaned over the goal line while being tackled for his team-leading fourth TD reception.

But Los Angeles took a 9-7 halftime lead and then made a 78-yard scoring march right after the break led by Allen, whose third catch on the drive was for his fourth TD in three games.

Coons went 4 for 5 on field-goal attempts as the fourth person to attempt placekicks for the Chargers this season. The former Browns kicker was signed this week to replace Nick Novak, who hurt his back last week against Dallas. Coons missed a 38-yard field goal on LA's opening drive, but subsequently hit from 21, 40, 22 and 27 yards.